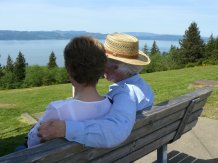 A new study aims to find a way of helping people identify unsuitable partners before they commit.

Fiona Shackleton, an alumna of the University, is described as one of the “most ferociously brilliant” solicitors in the country. She has acted in divorce cases for famous clients including Paul McCartney and Liam Gallagher. Her support has enabled a new study to start which aims to find a way of helping people identify unsuitable partners before they commit.

As law firms deal with the usual expected spike in inquiries from couples looking to divorce this month, academics from the University of Exeter Law School and Medical School and Baroness Shackleton hope their work will help prevent relationship breakdown, and the tragic consequences which go with it.

The academics will interview couples, some based in the South West, who have lived together for 15 years or more to discover what makes relationships last.

They have already interviewed family court judges and divorce lawyers to get a sense of the most common reasons given for relationship breakdown in divorce petitions, as official statistics about divorce only show the overarching reason relied on, such as unreasonable behaviour or infidelity.

They hope their overall research findings will inform the development of resources for young people to help build relationship skills and avoid bad relationship choices now and in the future.

Professor Anne Barlow, Professor of Family Law and Policy at the University of Exeter Law School, said: “Our aim is to find what makes relationships stand the test of time. Of course all couples are all unique, but we know there are very common reasons why people separate and divorce, as well as remain happy.

“This project will allow us to share that information with a new generation who will one day have families of their own, so they can make good choices.”

Baroness Shackleton said: “I have seen first-hand the tragedy of family separation of the devastating effect it has on innocent children leading to problems throughout their lives, and I have often observed that divorce might be avoided if people, before they make a life-long commitment to each other, asked themselves more searching questions about how suitable or compatible they are. Of course big change and life events also put strain on relationships and knowing more about what builds resilience in relationships is vital.

“I’m delighted to support this project, which will provide much-needed evidence and resources for people so they can build strong relationships. My ambition is to use this evidence in a practical and meaningful way by introducing it into schools possibly by way of a short video and/or app on telephones so that it could form part of the school curriculum, like sex education and drug and alcohol abuse and to enable it to reach as wide an audience of young people as is possible. In doing this, this would become part of early intervention or pre intervention.”

The study will build on existing research by Dr Ewing, who previously interviewed 52 couples three times during the first four years of marriage to examine what drives thriving relationships and what leads to the erosion of marital satisfaction in the first few years after a wedding. She found having a strong friendship, dealing early and effectively with conflict, good communication and the ability to see the best in your partner are key. Dr Ewing will now revisit these couples after 10 years of marriage to see whether this holds true in the longer term, while Sharon Blake will conduct interviews with the couples newly recruited to the research project.

Baroness Shackleton is solicitor to Princes William and Harry and was appointed to the rank of LVO in the 2006 New Year's honours list. She was awarded an Honorary Doctorate by the University of Exeter in July 2010 and her peerage later that year.

The Shackleton Project began in September 2016 and will run for 18 months. The funding also includes a studentship for a Masters’ student and contributes towards the University’s most ambitious fundraising Campaign: Making the Exceptional Happen, which will launch on February 9 in London. The campaign aims to enable the institution to expand its world-class research and enhance its student experience.

Anyone who wishes to take part in the research should email relationshipsproject@exeter.ac.uk