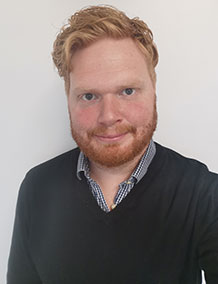 Josh Martin was appointed a Lecturer in Law at the University of Exeter in 2018, having also been a teacher at Exeter throughout his PhD. He has a varied experience and interest in a number of areas of research, including marine law and governance, environmental governance and policy, transnational law, cultural heritage law, transnational dispute management and global governance.  He has a specific interest in archaeology and the law, with a particular focus on the management and protection of shipwrecks, submerged landscapes and all forms of underwater cultural heritage. He is currently developing further research outputs and is also open to engaging in related impact-driven and multi-disciplinary research collaborations across these areas.

Josh has previously undertaken a Doctoral Fellowship investigating trade-related disputes at the Centre for Trade and Economic Integration in Geneva and he is also a qualified Mediator and a Collaborative Lawyer. He has taught on a number of modules across the Law and Politics disciplines at Exeter and has also delivered workshops providing essay and dissertation mentoring. He is presently preparing a series of several research papers in the field of underwater cultural heritage law and in global ocean governance.

Josh is a member of the Joint Nautical Archaeology Policy Committee, a leading UNESCO-Accredited NGO focused on advising on matters relating to underwater cultural heritage law and policy.  Given a childhood obsession with its story, he has a particular expertise and interest in the legal and ethical status, as well as future management, of the wreck of RMS Titanic, including previous media appearances and further research in production on the complex issues surrounding the site.  He is also Deputy Lead for Exeter's burgeoning research network, Exeter Extreme Environments (website forthcoming), as well as a member of the Exeter Centre for International Law and Science, Culture and the Law at Exeter (SCuLE) research groups, #ExeterMarine and Heritage at Exeter research networks, and an Associate member of the Environment and Sustainability Institute.

Josh is open to engaging in collaborative, multidisciplinary and impact-driven research in the following areas:

The international community faces unprecedented environmental challenges in the coming years. Tom’s research argues that environmental wellbeing should be awarded primacy over human endeavour in future legal and governance solutions to addressing such growing environmental degradation.  Such an approach would require states implement policies and courts make decisions with a clearer line of emphasis on ecological prosperity to safeguard against further environmental infringements, instead of consciously or unconsciously prioritising anthropocentric aims. The work thereby critically analyses the prospective application of the theory of ‘Legal Ecology’, which emphasises that primacy of ecological systems over human endeavours should act as an ultimate enabler or a disabler to human activities. Using the Arctic region as a case study, it therefore interrogates the extent to which legal ecology could be applied by law makers, or could apply to and shape judicial decisions, as well as unearthing the critical issues which have prevented this from happening.  The focus point of the study is the Arctic region, given its complex and varied legal status, with competing sovereign claims to terrestrial and marine territories and resources, as well as its areas beyond jurisdiction. These areas are also occupied by numerous indigenous communities, rare biodiversity and pristine ecosystems and sought after resources, which are all presently threatened by enormous environmental change.

This research has been developed to address the protection of Underwater Cultural Heritage (UCH) in marine resource management. In light of the UN’s upcoming Decade of Ocean Science (2021-2030); the integrated protection of natural and cultural marine resources has been highlighted as an essential aspect of the sustainable development of the ocean. Despite this, the protection of UCH within these frameworks remains largely absent. To explore this issue, an interdisciplinary investigation of the role of UCH in integrated marine resource frameworks will be conducted with the aim to bridge the gap between theory and practice with an integrated policy proposal.

The European city is no longer simply European. It has become the transnational city, embodying concerns that go well beyond local and national borders. As nodes of inter-urban networks that connect constellations of like-minded actors across vast organisational scales, a distinct class of Leading European City (LEC) has emerged, consolidating standards of climate change governance supported by a complex polycentric infrastructure. Operating through an alternative geography of authority at the periphery of conventional environmental regimes, LECs are beginning to develop and internalise climate norms, policy experiments and models of best-practice through a process of exchange, diffusion, iteration and homogenization. In introducing Leading Cities as both normative intergovernmental institutions and global actors, Harry's research aims to shed light on the transformative potential of LECs on the multilevel governance architecture of the European Union, the environmental policy trajectories of Member States, and the simultaneous hybridisation of scales and sectors previously thought to be highly integrated and discrete.

The first of my legal heroes is Elisabeth Mann Borgese.  A Professor at Dalhousie University, Halifax, Canada, Elisabeth was an internationally recognised expert on maritime law and policy and the protection of the environment.  She was one of the founding members and for a long time the only female member of the Club of Rome.  She worked closely with Arvid Pardo on the concept of a the ‘common heritage of (hu)mankind’ in the 1960s and promoted a global community-oriented approach to ocean governance.

My other legal hero is a wonderful character called Richard Martin (which happens to be the same name as one of my brothers).  Richard was admitted to the bar at Lincoln’s Inn in 1776, serving as a lawyer and sheriff in Galway, Ireland.  He used this platform to propel himself into a career in politics, where he served as MP for Galway at Westminster.  In addition to having a very quick wit and amenable personality, as well as having allegedly fought in over 100 sword and pistol duels, he was a twice-shipwreck survivor, frequent traveller, habitual gambler and an ardent abolitionist.  However, “Humanity Dick”, as he was called by his friend King George IV, was really famous for his life-long work as an animal rights campaigner and his dedication to ending all forms of animal cruelty.  He drove forward various legislative changes to address blood sports and other forms of animal cruelty and he used his political platform to help establish the Royal Society for the Prevention of Cruelty to Animals (RSPCA) in 1824, which is regarded as the oldest and largest animal welfare charity in the world.