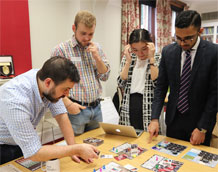 On Friday 25 January, 16 students took part in a crisis simulation based on the board game Aftershock. The simulation was run with the support of Dr Martin Robson from the University’s Strategy and Security Institute. Acting as the Government of Carana (based on Haiti), the Army, the UN and NGOs, teams worked together to respond to a natural disaster on the island. Teams had to take it in turns to rebuild the port and airport, co-ordinate supplies to support damaged districts, and prevent loss of life. These tasks were made harder by limitations set on each group, such as certain groups not having infrastructure-building capabilities. Students were forced to negotiate strategies with each other to address areas in a state of emergency, and ensure aims were met.

The complexities teams faced in their decision-making process was designed to reflect the complexity of disaster relief. As well as tackling logistics and supply issues, cards turned on each go created further problems for the groups, such as mass illness appearing in certain districts. Trying to balance long term aims with solving immediate issues, teams had to think strategically to reduce possibility of human loss, and plan ahead for upcoming issues.

Umaira Navaid, a participant of the Crisis Simulation and a third year History and Politics student remarked; ‘I had an excellent time at the Crisis Simulation. The opportunity to apply the theories of strategy in a real-world scenario was invaluable and incredibly challenging. I learnt a lot about decision-making and feel better prepared for when I will be faced with tough decisions.’

Fourth year International Relations Student, Alessandra de Visintini, commented; ‘The Aftershock Crisis Simulation was an eye opening experience to the world of humanitarian aid and development. With its complexity, its challenges and the personal desire to succeed, the Crisis Simulation was a stimulating exercise which enabled different students from different departments to collaborate and cooperate in order to save as many people as possible. The experience was extremely beneficial both academically and personally because it enabled to tackle a specific task whilst at the same thinking outside the box. If I could, I would participate again.’

Grace Owen-Ellis Clark, a second year History and Spanish student described the experience as ‘invaluable to me for representing what strategy means in the real world, and greatly aided my ability to adapt to changing circumstances and make considered decisions under pressure. The teamwork aspect not only made the whole experience more fun, but also provided a realistic demonstration of how necessary it is to work together (even if it means sacrificing personal interests) to achieve a mutual goal.’

We would like to thank Dr Robson for his support, and the students that participated.