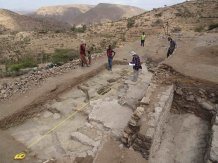 Recording a large building that was excavated at Harlaa. This was probably a palace or civic building and was radiocarbon dated to the mid-12th to mid-13th centuries AD (photo. T. Insoll)

Early Muslim communities in Africa ate a cosmopolitan diet as the region became a trading centre for luxury goods, the discovery of thousands of ancient animal bones has shown.

Halal butchery practices became common when Islam spread through Ethiopia as vibrant communities developed because of the import and export of products around the Red Sea, and to Egypt, India, and the Arabian Peninsula, archaeologists have found.

New excavations at three sites in the east of the country completed by the University of Exeter and the Ethiopian Authority for Research and Conservation of Cultural Heritage have uncovered around 50,000 animal bones dating from the eighth/ninth centuries onwards, and showing people living there at this early time ate a Muslim diet 400 years before major Mosques or burial sites were built in the 12th century.

The team, led by Professor Timothy Insoll, and involving archaeozoologist Jane Gaastra from the University of Exeter’s Institute of Arabic and Islamic Studies, found the first evidence in Africa for ancient halal butchery during the excavations, at Harlaa, Harar, and Ganda Harla.

Previous excavations led by Professor Insoll have revealed the Mosques and burial sites, as well as the remains of luxury materials such as ceramics from China and Egypt, marine shell from the Red Sea and beads from India.

Harlaa was established in the 6th and 7th centuries before Islam arrived in Ethiopia. It was abandoned in the 15th century when Harlaa and Ganda Harlaa were established, possibly because of plague or environmental change, and with the increasing spread of Islam better places to farm could be lived in.

During the period from which the animal bones date people may have been using smaller Mosques not yet discovered by archaeologists, and built larger buildings for worship as Muslim communities grew.

Professor Insoll said: “We didn’t expect to find bones of this quality and quantity. They are so well preserved that we can clearly see both cuts and evidence of wear. We’ve also found bones in both residential areas and places of work”.

“This is significant new information about people’s religious identity at the time. It shows in the early days of Islam in the region people were just starting to adopt religious practices, so were sometimes pragmatic and didn’t follow all of them.”

Analysis of wear on the bones show cattle were used for ploughing and turning grinding stones, and other species such as camels, horses, and donkeys, may have been used as pack animals to carry trade goods and other commodities. Analysis of the age data of cattle bones at Harlaa indicated 80 to 90 per cent of animals survived beyond 3 years of age, showing they were kept for milk or for work rather than bred to eat.

Archaeologists found the remains of pigs in Harlaa and Ganda Harlaa, which could have been domesticated or wild, unexpected in an Islamic area, as pigs are haram, ot forbidden in Islamic halal diet. This suggests the region was cosmopolitan, with visitors and residents from different areas and with different religions. Another explanation could be that early Muslims in the area ate pork during this period for practical reasons. No pig remains were found at Harar, which was a city of Muslim scholarship and pilgrimage. Similar halal butchery techniques were used in all three sites, showing the influence of Muslim traders who arrived in the area and the spread of Islam to first Harlaa, and then Harar and Ganda Harla.

At Harlaa researchers also found evidence of marine fish imported from the Red Sea some 120 kilometres away. These had all been processed prior to being sent to Harlaa, either in dried or salted form to preserve them. This was indicated by the complete absence of fish heads showing these had 2 been removed, probably at the Red Sea coast. No local freshwater fish species were found suggesting the people eating the fish were used to a sophisticated diet.

Similar animal body portions were found at each site, indicating wealth or status may not have been a factor in access to meat.

The study, published in the Journal of African Archaeology, indicates that the discarded remains of meals eaten many hundreds of years ago can provide very important information on diet, but also religious conversion, trade, and the use of animals for transport and work purposes in Islamic societies in Africa which have been largely neglected by archaeologists.