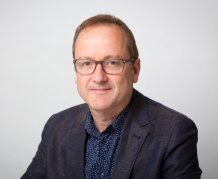 Richard will take up his new role in September 2019

The University of Exeter has appointed Professor Richard Moorhead as the new Head of Law starting in September 2019.

Richard has a distinguished career in law and ethics. He provides advice to the UK government and parliamentary committees and has contributed to a greater public understanding of the legal profession through numerous publications and media roles.

Richard joins the University of Exeter from University College London (UCL) where he is the first Chair of Law and Professional Ethics and Vice Dean (Research) in the Faculty of Laws. He was UCL’s Director of the Centre for Ethics and Law until 2016. Prior to the role at UCL, Richard was Professor of Law at Cardiff University.

Professor Richard Moorhead is currently on the Data Evidence and Science Board at the Ministry of Justice and a previous member of the Civil Justice Council, as well as the Legal Services Consultative Panel. He has advised three Select Committee legal aid inquiries and currently advises the Women and Equalities Select Committee on Non-Disclosure Agreements.

Richard was elected a Fellow of the Academy of Social Sciences in 2019 and a fellow of the Royal Society of the Arts in May 2016. He sits on the editorial board of the International Journal of the Legal Profession, and the advisory boards of the Journal of Law and Society and Ethics and Behaviour.

Wendy Robinson, Pro-Vice Chancellor at the College of Social Sciences and International Studies said on appointment: “We are thrilled that Professor Richard Moorhead will be joining the University of Exeter as our new Head of Law. Richard has a brilliant career in law and ethics and will be an exceptional leader at the Law School. We know that Richard will help us build on our strengths and we look forward to welcoming him in September.”

Professor Richard Moorhead said on appointment: “I am really excited to be joining the University of Exeter Law School. It’s a revitalised school with emerging strengths in three areas critical to the future of legal education and research: the increasingly global nature of law; the regulation of digital worlds; and the increasingly evidence and design-based nature of law and lawyering.

“A globally engaged, digitally-aware, evidence-based focus to legal education and scholarship is critical to the excellence of law students and law schools. Exeter is already building in these areas on strong foundations of mainstream commercial and European legal thought and history.

“I also think Law School values are important. The academy has a job to do in maintaining trust. Exeter’s staff and students build great bridges with local communities through their pro bono and outreach work. Access to justice is vital. And universities and law schools need to lead on diversity at all levels, especially those within our own control. I am absolutely committed to that.

“Finally, like Exeter’s terrific family law researchers, I believe in bringing constructive challenge to the professions, the courts, and policy makers. The academy can offer challenge and sometimes leadership to the legal world if we do a better job of engaging with them.”

Richard will take up his new role in September 2019.