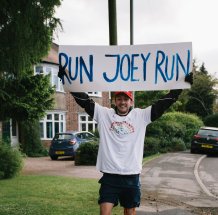 A University of Exeter student has raised £10,000 for those affected by mental health issues during the coronavirus pandemic by running 131 miles in just five days.

Joey Higham had never taken part in a marathon before, but completed five in less than a week to raise awareness of the work of the charity Mind. He was spurred on by messages from supporters, including from a mother whose son had committed suicide, as he completed the gruelling physical challenge.

The 22-year-old had completed no training before starting the marathons, where he circuited a local field near his family home in Leicestershire, passing a drinks table stationed outside his house. He hopes his achievement will raise awareness of mental health issues and play a part in ending the stigma associated with them. He started running after reading about the current mental health struggles of healthcare workers.

Joey was left in extreme physical pain as he “dragged” himself around the field between May 6 and 10th, with his parents Joanne and Gary providing moral support and food and drink. He burned around 11,000 calories during his challenge and has recovered physically. Joey hopes to continue to support work to get rid of the stigma surrounding mental health issues but has no immediate plans for more physical challenges just yet.

The politics and Middle Eastern studies student will graduate this summer, after which he will take on a graduate role at KPMG in Manchester. His marathon attempt took place in a gap between handing in coursework and exams.

Joey said: “I’m overwhelmed by how generous people have been, and the support I have been given. I had the idea one day, posted on Facebook in the evening and by the morning I had already reached my initial target of £600.

“It was probably a stupid idea because I hadn’t done any training and I underestimated the scale of physically what I had to do. I’m relatively fit from playing hockey at university, but I haven’t played in as many games as usual this year. It was much harder than I had thought, I only got through it because of the kindness and generosity that everyone was showing.

“I received an anonymous donation on the morning of day two which read “Thank you, from a mother who lost her son whose struggle was too much” at that moment I knew I had to finish the challenge. I realised that the cause I was doing this for was bigger than each individual step I took. With all this support it drove me forward in the hope that we can make a small positive difference in tackling the stigma surrounding mental health whilst raising priceless funds that can save lives.

“After I announced the challenge quite a lot of friends pointed out how long marathon training is supposed to take. My mum’s initial reaction was that I might not raise £100. But I took it slowly and just tried to keep putting one foot in front of the other..

“I couldn’t even eat at the end of each day as my body started rejecting food and I had to take ice baths. It was beyond anything I’ve experienced, the hardest thing I have ever done, physically and mentally. I can’t describe pain I was in.”

Fellow members of the University of Exeter Hockey Club provided support by running seven marathons between them on the final day of Joey’s challenge, posting on social media so he could see as he ran.

Joey said: “At the end of each day I couldn’t allow myself to think about the next. I had blisters on top of blisters but I knew I was raising money and making people smile and that’s what was important. Everyone is metaphorically running their own marathon at the moment during this difficult time, but the important thing to remember is that you are never running it alone. The amount raised so far is just mind-blowing and I’ll never find the words to thank people enough.”

As he completed his last marathon Joey was showered with champagne by his family and greeted with applause by friends who had come to watch from a distance.

To donate go to https://www.justgiving.com/fundraising/joey-higham.