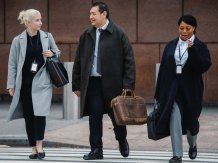 The coronavirus pandemic has led to more people choosing to become “microworkers”, a new study shows.

The use of digital platforms to get paid for short tasks such as coding, translation, surveys and identifying images has provided new opportunities for workers to participate in the labour market but has also exacerbated labour market inequalities, experts have said.

A total of 36 per cent of those who took part in a new survey reported starting microwork during the pandemic. Several participants mentioned the Covid pandemic as a significant factor in their reason for starting microwork.

Almost all of those who took part in the research - 95 per cent - earned below minimum wage for microwork and almost 2 in 3 earned less than £4 an hour. Half also had full-time work, 29 per cent were in part-time or casual work, and only 20 per cent were not engaged in any other paid work.

Most of those who took part in the research wanted to earn extra income, and their microwork was in addition to other paid work.

Researchers from the think tank Autonomy and the University of Exeter and the London School of Economics surveyed 1,189 UK-based workers on three major microwork platforms: Clickworker, Prolific and Amazon Mechanical Turk. They also carried out 17 in-depth interviews.

Dr James Muldoon, from the University of Exeter, said: “This report provides one of the first comprehensive analyses of microwork in the United Kingdom. While microworkers in other parts of the world work long hours and rely heavily on income received from their work on platforms to provide for their essential needs, UK-based workers tend to work fewer hours and see their work on the platform as supplementing other sources of income, even full- time jobs. Many workers we interviewed explicitly spoke of their work on platforms as a ‘side hustle’ and only one of a range of revenue streams.”

Workers were divided across different social classes and educational backgrounds. Those from low-income backgrounds were most likely to see microwork as providing essential income, while those on higher incomes were less reliant on microwork to pay for basic goods.

Over half of respondents said they preferred to work outside an office and one in three wanted to work at a time that was convenient for them.

Most workers did not report working very long hours on microwork platforms. One in three only worked an hour or less per week, while more than half worked between one and ten hours per week. Only 10 per cent worked over 10 hours each week.

The report recommends microworkers should be offered ‘finders fees’ and payment for pre-task tests so all time ‘on the job’ is financially remunerated. It also outlines a range of policies which could help improve working conditions for microworkers within the UK.

This includes ratings systems for contractors and worker messaging systems so that microworkers are better placed to organise for improved working conditions and to spot bad employers.