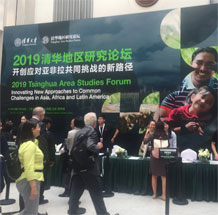 The University of Exeter is one of the principal supporting institutions of the Forum, alongside SOAS, the University of Oxford, Yunnan University in China, and the King Faisal Center for Research and Islamic Studies in Riyadh, Saudi Arabia.

Professor Tim Niblock, Emeritus Professor at the University of Exeter and founder of Exeter's Institute of Arab and Islamic Studies, is on the advisory board of the Tsinghua Institute, and Exeter staff were well represented at the Forum with Catherine providing representation for the Politics Department. Area Studies specialists from around the world presented their research during two full day of panels, during which Catherine presented her research into civic participation in local governance in Kyrgyzstan. The conference ended with a debate on the future of Area Studies, in which the structural inequalities that exist within Area Studies were discussed, in terms of gender, language, and the North/South academic divide, as well as proposals for how to overcome them.

Dr Owen gave her reflections about the event:
"The Forum is the flagship event for the Institute of International and Area Studies, which was founded in September 2017 at Tsinghua University. The unique aspect of the Institute for Chinese social science is that it requires its PhD students to spend around two years immersed in their field sites and are required to be fluent in their language of research, as well as in English. This is a real departure from many courses in China where students rarely have the chance to visit their country of study or conduct in-depth fieldwork. I met and chatted to many of the PhD students during the conference and was very impressed, not least with their remarkable language skills.
What was most fascinating was to see how Chinese scholars envision the discipline of Area Studies, itself founded as part of the colonial project of Imperial Europe. I felt that it was really important to be part of this foundational moment of Chinese Area Studies, because in-depth ethnographic knowledge of the countries that will be affected by its Belt And Road Initiative will be central to turning the 'win-win' discourse accompanying BRI into reality".