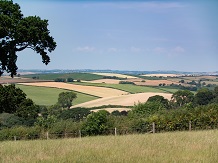 Government policies across the UK increasingly connect objectives for farming with the environment and broader natural capital approaches (e.g. 25 Year Environment Plan, Agriculture Bill). However, any discussion around natural capital and farming requires a farming system that improves or maintains natural capital against a backdrop of pressures such as environmental change, economic uncertainty and BREXIT.

Speaking at the concluding conference in Dorset for a Valuing Nature Programme funded project on lowland agriculture and ecosystem services1, which explored the future of farming in Dorset and its association with natural capital and ecosystem services by bringing together researchers, practitioners and local conservation groups, Professor Winter pointed to the high dependency of UK farmers on support payments. “Plans to reduce and eventually eliminate these payments post-Brexit and replace them with environmental payments for public goods need to be handled with great care if we are to avoid devastating consequences for the social, economic and cultural fabric of our countryside” explained Professor Winter.  “Payment for public goods is something I have long advocated for farmers, but many of these public goods are linked directly to farming systems that may be under threat in a post-Brexit word.  We urgently need to shift the debate from the economic notion of public goods to a much broader conception of public policy.”

Professor Winter pointed out that the two most notable European countries outside the EU, Norway and Switzerland, financially support their farmers to a greater extent than the EU does. “Combining a massive reduction in direct agricultural support with new environmental support mechanisms in a densely populated land which is not self-sufficient in food is an experiment with our farming future that has not been attempted anywhere else in the world. Take care!” he warned.

See http://valuing-nature.net/lowlandTP  Michael is a member of the Co-ordinating team for the Valuing Nature Programme led by NERC.  He is also a member of the Natural England board. He was speaking in a personal capacity.