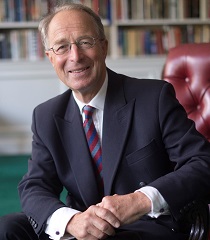 Lord Richards of Herstmonceux is the former Chief of the Defence Staff, the professional head of the UK Armed Forces and the principal military adviser to the Secretary of State for Defence and the Government, he is now retired and a member of the House of Lords with many other active business and charity interests.

Born in 1952 and educated at Eastbourne College, David Richards was commissioned into the Royal Artillery (RA) in 1971 prior to studying international relations at University College Cardiff.

Lord Richards' extensive military career included a number of tours in Northern Ireland, two years as Chief of Staff of the Berlin Infantry Brigade and three years as an instructor at the Staff College, Camberley. In 1994 he was promoted and appointed Colonel Army Plans in the MOD, responsible for the shape and size of the Army. Promoted to Brigadier in 1996, after attending the Higher Command and Staff course, he became Commander 4th Armoured Brigade in Germany.

In 1998 he was posted to the Permanent Joint Headquarters as Chief Joint Force Operations, the UK's default one-star commander for short notice expeditionary operations. In this role he was involved in a number of operations, including commanding the UK Contingent in East Timor in 1999, and twice commanding a UK Joint Task Force in Sierra Leone in 2000.

He was appointed Chief of Staff of the Allied Rapid Reaction Corps (ARRC) in April 2001 before becoming Assistant Chief of the General Staff in Sep 2002.   Appointed to command the ARRC in January 2005, he served as Commander of the International Stabilisation and Assistance Force Afghanistan between May 2006 and February 2007, a period that included NATO/ISAF expansion across the south and east of Afghanistan.  In January 2008, he took over as Commander-in-Chief UK Land Forces before then assuming the appointment of Chief of the General Staff in August 2009.

"In a complex and unstable world, coherent national and defence strategies are a vital ingredient in ensuring governments can plausibly defend their vital interests and avoid conflict as they do so. The University of Exeter's Strategy and Security Institute is one of very few places where students can learn relevant principles and process, the key tools of the trade. We need a new generation of professional strategists. This course produces them and I could not be more supportive of it."