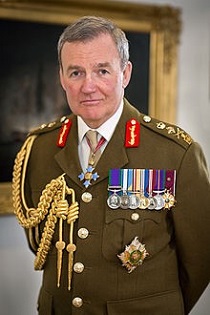 General Nick Houghton was born in 1954 in Otley, West Yorkshire. He was educated at Woodhouse Grove School in Bradford, RMA Sandhurst and St Peter’s College, Oxford, where he did an in-service degree in Modern History. Commissioned into the Green Howards in 1974, General Houghton was both a Company Commander in and Commanding Officer of the 1st Battalion in the Mechanised and Air Mobile Roles and in Northern Ireland. He attended the Army Command and Staff Course at both Shrivenham and Camberley and the Higher Command and Staff Course.

After Regimental duty General Houghton commanded 39 Infantry Brigade in Belfast during the period which led to the Good Friday Agreement. He was the Director of Military Operations in the Ministry of Defence at the time of 9/11; at the outset of operations in Afghanistan; and during the Foot and Mouth Crisis. Subsequently he was Chief of Staff of the ACE Rapid Reaction Corps from July 2002 to April 2004 and Assistant Chief of Defence Staff (Operations) from May 2004 to October 2005.

More recently General Houghton was the Senior British Military Representative and Deputy Commanding General of the Multi-National Force-Iraq from October 2005 until March 2006. He became Chief of Joint Operations in April 2006 at the time of the commitment of UK Forces to Southern Afghanistan and, subsequently, during the extraction of UK Forces from Southern Iraq. He was appointed both OBE and CBE for his time in Command in Northern Ireland and awarded the US Legion of Merit for his service in Iraq. He was appointed KCB for his time as CJO.

General Houghton became VCDS in May 2009. He was central to implementing the outcomes of the 2010 SDSR and was the sole military member of Lord Levene’s Defence Reform team. He was advanced to GCB in 2011. He assumed the appointment of Chief of the Defence Staff in July 2013.

As of March 2016, it was announced that General Houghton would succeed Lord Dannatt as Constable of the Tower of London. He assumed the post on 31st July 2016.

General Houghton is married to Maggie, they have two grown up children (Tom and Sophie) and their family home is in Richmond, North Yorkshire.