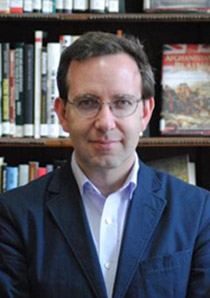 James de Waal is a senior consulting fellow in the International Security Department of Chatham House, The Royal Institute of International Affairs.

He served in the British diplomatic service from 1990 to 2014, including postings at the United Nations in New York, in Berlin, Washington and Santiago.

In London he worked in several different departments of the Foreign and Commonwealth Office, including (twice) in the Policy Planning Staff.

From 2009-11 he worked in the Ministry of Defence, including on the 2009 Defence Green Paper and the 2010 Strategic Defence and Security Review.

At Chatham House he has focused on the politics of UK and Western defence policy, notably the relationship between senior political and military leaders, as well as on general trends in international conflict.

His Chatham House paper Depending on the Right People: British Political-Military Relations, 2001–10 was published in November 2013.

“I like the way SSI looks at the reality of strategy-making, in practice as well as in theory. British security policy affects many lives in the UK and around the world. It needs to be better understood, and the reasons for its successes and failures better appreciated.”