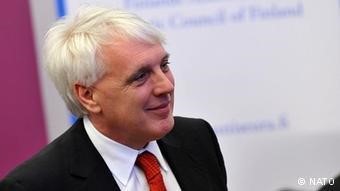 Jamie Shea held the position of Professor of Strategy & Security at SSI from September 2018 – July 2020, Jamie will continue to be involved with the Institute as an Honorary Professor.  Recently appointed President at the Centre for War Studies at the University of Southern Denmark, he is also currently a Senior Advisor at the European Policy Centre and a Senior Fellow at Friends of Europe.  These are two of the most active and influential policy think tanks in Brussels.

Jamie Shea was an international public servant and a member of the International Staff of NATO for 38 years.  His last NATO post was Deputy Assistant Secretary General for Emerging Security Challenges. Other positions included Director of Policy Planning in the Private Office of the Secretary General, Deputy Assistant Secretary General for External Relations, Public Diplomacy Division, Director of Information and Press, Spokesman of NATO and Deputy Director of Information and Press, Deputy Head and Senior Planning Officer in the Policy Planning and Multilateral Affairs Section of the Political Directorate as well as Assistant to the Secretary General of NATO for Special Projects. Outside NATO, Jamie Shea has been involved with several prominent academic institutions.

Jamie Shea has been made a Companion of the Distinguished Order of St Michael and St George (CMG) for his services to diplomacy and public service. He is a recipient of the Golden Eagle medal of the Republic of Albania and the Linden medal of the Czech Republic.  He was European Communicator of the Year in 1999 and in 2016 was awarded the International Prize for Human Rights of the AAB University in Kosovo.  He has also been awarded two honorary doctorates: one from the University of Surrey and the other from the National School of Public Administration in Bucharest, Romania.  He is a recipient of the NATO medal for Meritorious Service.

Jamie Shea is a regular writer, lecturer and conference speaker on NATO and European security affairs and on public diplomacy, political communication and many other areas of contemporary international relations. He holds a D.Phil. in Modern History from Oxford University (Lincoln College), 1981.