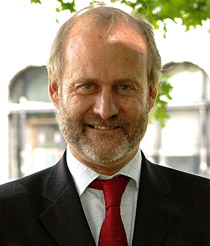 Myles has a long history of involvement with, and working in, Africa.  Between 1993 and 1997 he was based in Nairobi as Head of the British Development Division in Eastern Africa, responsible for British Government development programmes in Kenya, Tanzania and Uganda.  He coordinated the 1997 British Government White Paper 'Eliminating World Poverty: A Challenge for the 21st Century’; served on the Board of the World Bank (and as Development Counsellor at the British Embassy) in Washington from 1997 to 2000; and from 2000 to 2004 was based in Addis Ababa as British Ambassador to Ethiopia, Djibouti and the African Union.  He was, from early 2004 to late 2005, Head of Secretariat to the Commission for Africa (CfA).  The Commission’s Report ‘Our Common Interest’ formed the basis of the G8 Gleneagles Communique on Africa.  The Commission in September 2010 produced a further Report  ‘Still Our Common Interest’ to report on progress against the CfA’s recommendations.

Myles left Government service in late 2005. He became Chair of CONCERN UK, One World Media and Independent Vice-Chair of the Westminster Foundation for Democracy. He has been a Board member of the British Institute in Eastern Africa; the Crown Agents’ Foundation; the Tropical Health and Education Trust (THET); the Development Studies Association; the Comic Relief International Grants Committee; International Inspiration; Enterprise for Development; the Baring Foundation; and Restless Development. He was on the Advisory Council of Wilton Park, where he was from April-December 2017 also Acting Chief Executive; Honorary Vice-President of Voluntary Service Overseas (VSO); and Non-Executive Director of ‘Development Initiatives’. He has been a Specialist Advisor to the Parliamentary International Development Select Committee.

Myles is currently Visiting Professor (International Relations) at King’s College London and Honorary Associate Professor at the Strategy and Security Institute, University of Exeter.  He is Chair of the Joffe Charitable Trust. He is on the Boards of the Royal African Society and BBC Media Action; and Honorary Advisor to Malaria No More UK, the Tropical Health and Education Trust (THET), and the Coalition for Global Prosperity. He has written extensively on Africa and development. His book ‘Aid and Development: A Brief Introduction’ was published by OUP in June 2015.

Myles has degrees from the Universities of St Andrews (MA First Class Honours) and Oxford (M.Litt), and has been awarded Honorary Doctorates by Leeds Beckett University, the University of Ulster and the Open University (where he was also a Visiting Professor) in recognition of his work on Africa and development.  In the New Year’s Honours 2006 he was appointed CBE and in the Queen’s Birthday Honours 2021 he was appointed KCMG.

Of his association with SSI Myles adds "I am delighted to be associated with the Exeter Strategy and Security Institute.  I am enormously impressed by the quality both of its courses and the students it manages to attract, and am pleased to be able to contribute to the inter-disciplinary framework within which security issues must be considered".