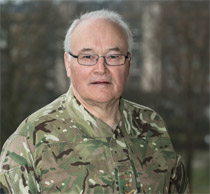 Peter Wall retired as the head of the British Army in September 2014 after a 40 year career.  He joined the Army straight from Whitgift School in 1973 and was commissioned from Sandhurst into the Royal Engineers.  He went on to read engineering at Cambridge University.

He has served all over the world in airborne, Gurkha, and armoured formations, and on operations in Rhodesia, Bosnia, Afghanistan and Iraq.  His last 4 years saw him leading the Army through an intensive change programme in response to the 2010 defence review.

He now lives in Somerset with his family.  He is embarking on a new career in leadership consultancy.  His interests include most sports and the countryside.

He is President of Combat Stress, the military mental health charity, and Chairman of the Gurkha Welfare Trust.

He is a visiting professor at the Strategy and Security Institute, University of Exeter, and an Honorary Fellow of Selwyn College Cambridge, the Royal Academy of Engineering and the Institute of Civil Engineers.