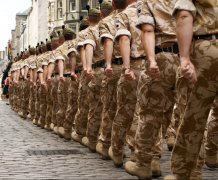 Experts from the University of Exeter will appear before the Defence Select Committee on Tuesday, November 24th to give specialist comment on the new Strategic Defence and Security Review (SDSR).

Professor Patrick Porter and Dr David Blagden, from the University’s Strategy and Security Institute, will address the committee members about details announced in the SDSR - the government's foremost document on defence strategy – to the House of Commons on Monday.

Their appearance follows a written submission, produced by the experts along with General Sir Paul Newton, to the committee for its current inquiry,'Flexible Response? An SDSR checklist of potential threats’.

The submission builds upon the professional experience of General Newton in the field, and as former head of the MOD’s Development, Concepts and Doctrine Centre and Commander Force Development & Training.

It also draws on the published research of Dr Blagden into the implications of multipolarity and the rise of new powers, and the work of Professor Porter on both geopolitics and the problems of uncertainty in national security strategy.

Speaking ahead of the select committee appearance Professor Porter, who is also part of the University’s Politics department said: "We are delighted to be contributing to the SDSR hearing at a critical time for the UK security debate, following the work that SSI has done under the leadership of General Sir Paul Newton."

The SDSR, which was outlined to MPs by Prime Minister David Cameron, is designed to review the threats to the UK and what capabilities the nation's military needs to respond.

Amongst the announcements made by the Prime Minister were the formation of new strike brigades, equipped to deploy across the globe and use the army's new generation of Ajax armoured vehicles, the addition of nine new Boeing P8 maritime patrol aircraft, and a 10-year extension to the operational lifespan of the RAF's Typhoon jets and upgrade work to give them ground attack capabilities.