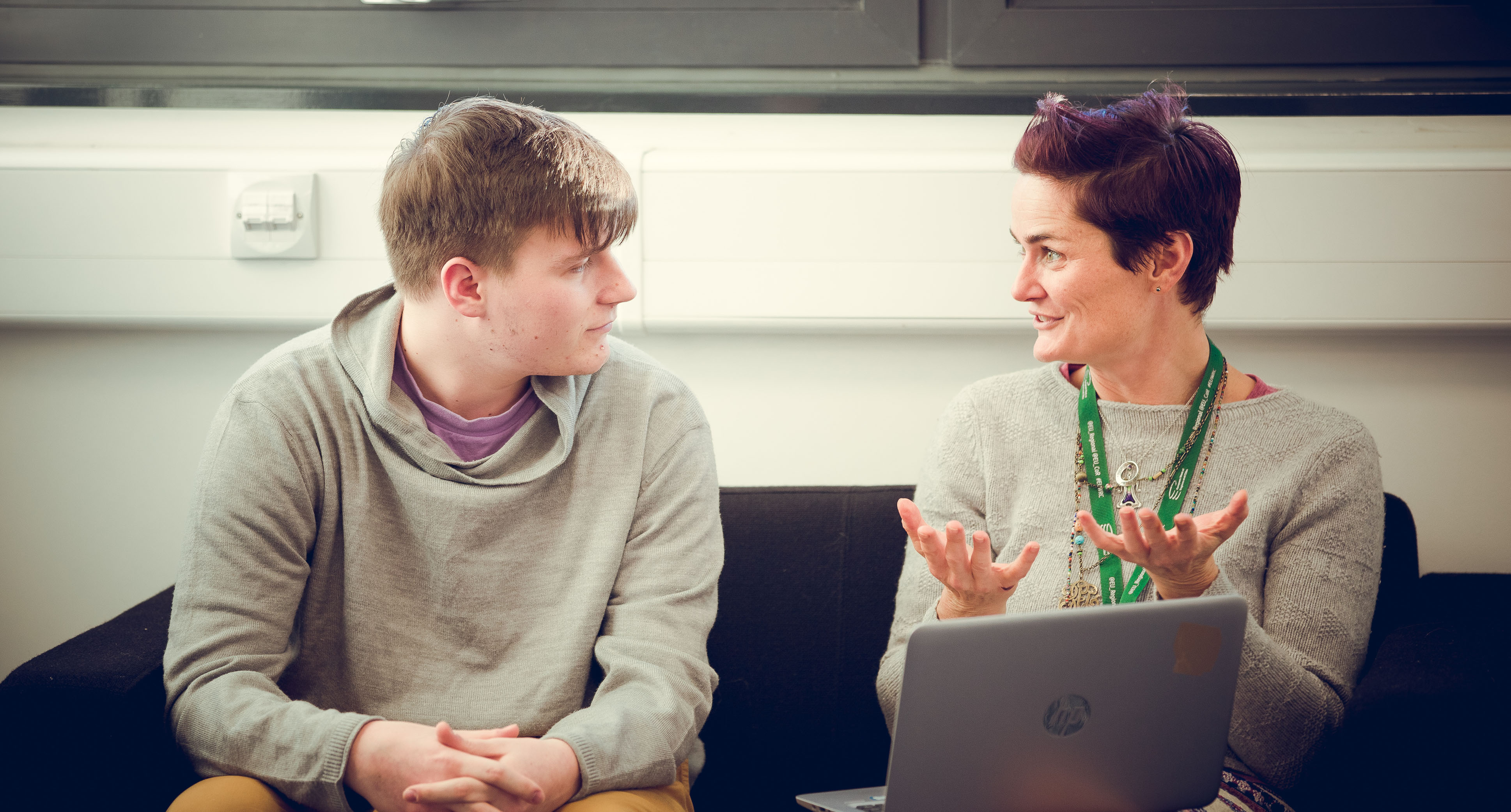 Dr Joanie Willett meeting with one of her students 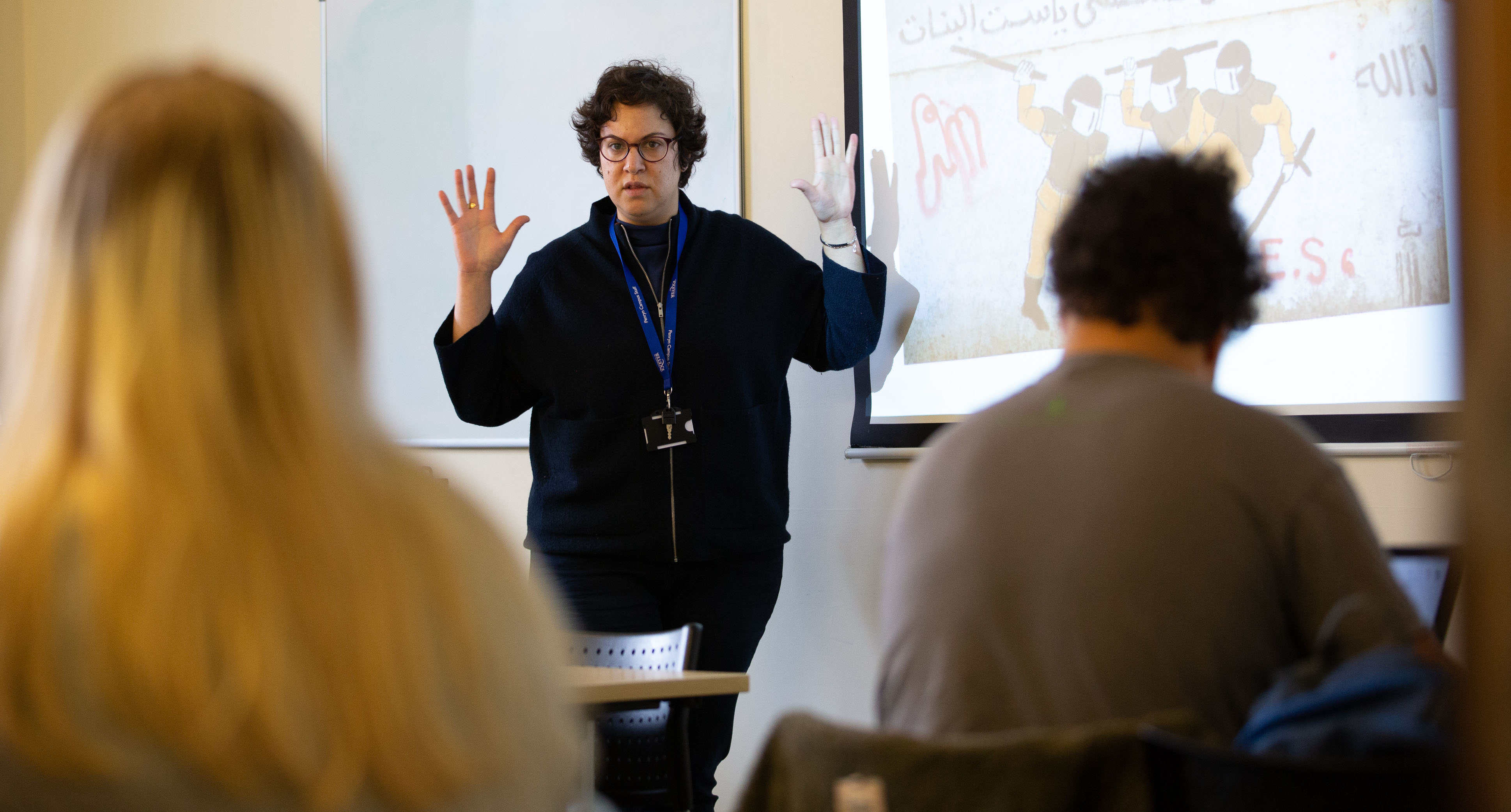 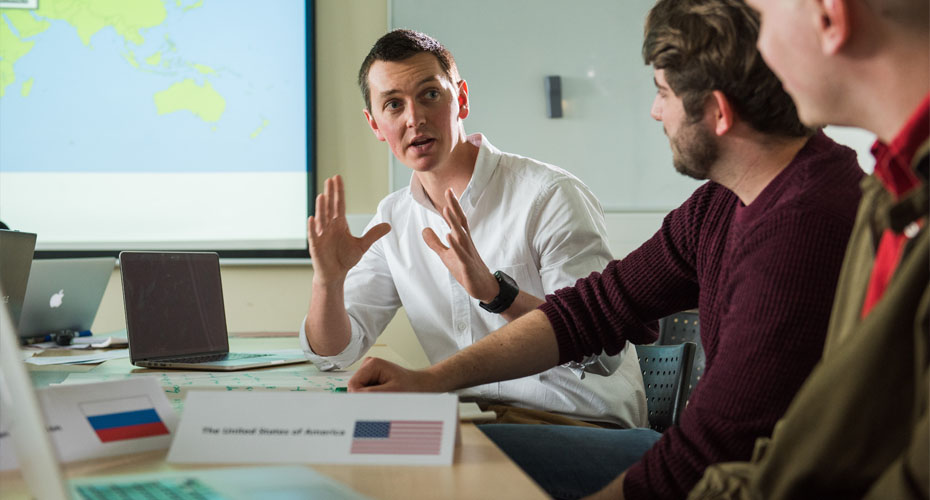 We excel in research and teaching across all the main areas of political science. Research by our faculty is funded by leading research councils and is used by governments and networks around the world.

Karen is our Director of Admissions. She is a social scientist interested in the politics of knowledge, evidence and public policy. Her main focus at the moment is on the current international political and policy interest in measuring wellbeing and how this relates to sustainable development issues. She is also researching how to improve evidence for policy evaluation in environmental policy areas, working with government departments and agencies such as Defra; the Department for Business, Energy, and Industrial Strategy; the Food Standards Agency and the Environment Agency.
Learn more about Karen by visiting her staff profile

Dan’s main interests are in mass political behaviour in the United States and Britain. He looks at the major influences on political attitudes and behaviour, such as the economy, political advertising, and the news media. He has recently published a piece of research on security politics: Everyday Security Threats: perceptions, experiences, and consequences.
Learn more about Dan by visiting his staff profile

Clare’s main research interests are social movements / protest and environmental politics. Her research on social movements has been particularly focused on environmental and global justice movements, although she has recently been engaged in a pan-European study of protest on a range of issues. Along with fellow Politics Penryn academic, Dr David Benson, Clare is the co-author of the leading Environmental Politics text book used at universities throughout the world: Politics and the Environment: from theory to practice.
Learn more about Clare by visiting her staff profile

Sabiha joined the Politics department in Penryn at the University of Exeter in September 2019. She works in the fields of gender and sexuality studies (with reference to the Middle East). She is particularly interested in the racialized, sexed and gendered logics that construe our world. She is dedicated to producing decolonized knowledge – a belief that she holds dearly and thrives to implement in her teaching and writing.
Learn more about Sabiha by visiting her staff profile

David is a Senior Lecturer in the department. He is an interdisciplinary social scientist with a background in both political and environmental sciences. His main areas of research are environmental politics, policy and governance in different national contexts. Along with fellow Politics Penryn academic, Professor Clare Saunders, David is the co-author of the leading Environmental Politics text book used at universities throughout the world: Politics and the Environment: from theory to practice.
Learn more about David by visiting his staff profile

Learn more about Aneta by visiting her staff profile

Sarah works in the field of Critical Military Studies and International Relations. Her research is deeply interdisciplinary, engaging with political geography, queer theory, sociology and history. She teaches modules on humanitarian intervention and the politics of war, and is currently collaborating with Godfrey Marinigira at University of Western Cape on ex-combatants and veterans issues in UK and Africa.
Learn more about Sarah by visiting her staff profile

Learn more about Deborah by visiting his staff profile

James' research is on political parties, social movements, political campaigns and democratic theory. He offers courses on political theory and a variety of skills for social change such as political communication, public narrative, situation analysis and project planning.
Learn more about James by visiting his staff profile

Learn more about Shubranshu by visiting his staff profile

Catherine is a Senior Lecturer. The project explores citizen participation in processes of policy making and delivery in Russia and China. In particular, it conducts an interpretive comparison of participatory budgeting initiatives and the implementation of recycling policies in St Petersburg and Shanghai. This approach seeks to remain faithful to the situated nature of local political meanings, while highlighting common trends and processes.
Learn more about Catherine by visiting her staff profile

Lamprini’s main interests are comparative politics, political behaviour and political communication. Her research on comparative politics has been particularly focused on the party change of socialist parties throughout Europe under the dynamics produced by the rise of public opinion and the professionalisation of political communication frommid-1970s until mid-2010s. She has researched the rise of radicalism in crisis-ridden national contexts, as well as the online political networks of the far right and the far left. She is currently working on psycho-social perspectives related to the rise of right-wing extremism and the electoral rise of the far right in Europe. She has recently co-authored a piece on the role of local party organisation in the electoral breakthrough of right-wing extremism: From dusk to dawn: Local party organisation and party success of right-wing extremism.
Learn more about Lamprini by visiting her staff profile

Andrew's main area of research is contemporary political theory, with specific interests in the work of Hannah Arendt, Jacques Rancière and theories of radical democracy. His research draws on debates in democratic theory about agonism to examine issues surrounding reconciliation, human rights and popular sovereignty. He is an editor of the Journal of Contemporary Political Theory. With Alex Thomson and Benjamin Arditi, he also co-edits the Taking on the Political monograph series for Edinburgh University Press.
Learn more about Andrew by visiting his staff profile

Delacey's work centres on contemporary claims about transitions in politics, with a particular interest in tracing the enactments of global politics in seemingly minor contexts: local politics, built environments, aesthetic practices, and personal interactions. She works with a range of transdisciplinary methods, crossing politics, geography, and aesthetics, to understand the forces that stabilize and destabilize modern configurations of politics and international relations. Her teaching is grounded in the belief that to truly excel, students need to be challenged, engaged, and supported, and so her courses combine research-led instruction, community-connected learning, and professional skills development.
Learn more about Delacey by visiting her staff profile

Owen's primary research interests lie in International Relations, British Foreign Policy and Security Studies. He recently completed an ESRC funded research project examining the relationship between openness, secrecy and security in the 2003 Iraq War and subsequent public enquiries, including the recent ‘Chilcot’ Iraq enquiry. The paper from this project can be found here.
Learn more about Owen by visiting his staff profile

Joanie is a Senior Lecturer with the University of Exeter in the UK. Her research explores the inter-relationship between identity, the economy, and the environment. Joanie’s background is in the intersection between economic development and critical political theory, and critical geographies. Her primary research might broadly be described as exploring sustainable communities through theory, practice, policy and governance; using ideas around place-making and ‘rights to the city’ to consider who gets to shape rural regions. This has led to Joanie doing work on political participation and political decentralisation. She is currently working with case studies in the UK and the US. Drawing on identity politics and critical political philosophy, Joanie also does work on the politics of fashion – particularly using concepts around materiality, embodiment and affect to explore pro-environmental behaviour change.
Learn more about Joanie by visiting her staff profile