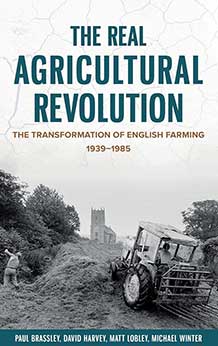 The Real Agricultural Revolution: the transformation of English farming 1939-1985

Members of the Centre for Rural Policy Research have won a prestigious history prize for one of their recent books.

At the online conference of the British Agricultural History Society on Monday 4th April 2022 the judges announced that The Real Agricultural Revolution: the transformation of English farming 1939-1985 has won the Thirsk Prize for 2022. The authors are Paul Brassley, Matt Lobley, and Michael Winter, and also David Harvey, formerly in Exeter’s Geography Department and now at the University of Aarhus in Denmark.

The Thirsk Prize is awarded by the BAHS for the best book on British or Irish rural or agrarian history published in the previous year. Its full title is the Joan Thirsk Memorial Prize, and it is named in honour of one of the most prominent rural historians of the last century. Joan Thirsk wrote numerous books and articles on rural history as well as being the editor of the 8-volume Agrarian History of England and Wales, published by Cambridge University Press. She was also, incidentally, Paul Brassley’s postgraduate supervisor. She died in 2013.

Previous winners of the prize have covered periods from the Anglo-Saxon to the twentieth century, and topics from the agricultural enlightenment and elite women in the 18th century landscape to the invention of sustainability and antibiotics in food production.

The Real Agricultural Revolution is published by The Boydell Press, and is the first volume in their Studies in Rural History series, edited by Professor Richard Hoyle. It is based on research on the archive of Farm Management Survey fieldbooks held in the Centre, which go back to the late 1930s, and were rescued from the basement of the Centre’s previous building, Lafrowda House. This invaluable and apparently unique resource was also supported by a programme of oral history interviews carried out by the authors. The Thirsk Prize judges highlighted not only the quality of the research going into the book, but also its readability, and we await the reviews with impatience and interest!