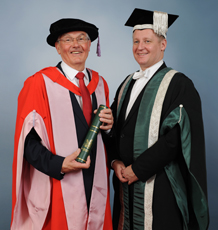 A University of Exeter expert has been awarded an honorary doctorate by the Royal Veterinary College for his outstanding contribution to promoting animal health and welfare.

Dr Keith Howe, who helped create the International Society for Economics and Social Sciences of Animal Health and is a former President of the Society for Veterinary Epidemiology and Preventive Medicine (SVEPM), was honoured at a ceremony at Central Hall, Westminster, this week.

At the University of Exeter Dr Howe is based at the Land, Environment, Economics and Policy Institute (LEEP). He has spent his career applying economics to problems of animal disease, and how veterinary resources can be best used to promote the well-being of animals and the people who depend on them.

One of his first major inquiries on joining the University of Exeter was to estimate the cost of mortality in pig, cattle and sheep production. He went on to carry out further research, modestly unaware of the impact his work was having on the veterinary profession until he attended the first meeting of the SVEPM.

As the University of Exeter became internationally recognised for economics applied to animal health, Dr Howe went on to organise a major conference for the European Commission on disease in farm livestock, and collaborate in European level veterinary projects including appraisal of vaccination for controlling Aujeszky’s disease, a viral disease in swine. Recently, he carried out research for the Swiss Federal Veterinary Office on the economic value of disease surveillance. He has worked as consultant and researcher for Ministry of Agriculture, Fisheries and Food (MAFF) and Department for Environment Food and Rural Affairs projects.

Dr Howe teaches at veterinary schools in the UK and abroad, and most recently helped to establish an international network of animal health economists, an initiative funded via the Royal Veterinary College by the European Union. This is now the International Society for Economics and Social Sciences of Animal Health.

At the ceremony Professor Stephen May, Deputy Principal of the Royal Veterinary College, paid tribute to Dr Howe’s “lifetime of work dedicated to the economic and social impacts of animal health, welfare and disease”.

Professor May described Dr Howe’s work as “a model of how progress can be made” and said “his teaching of animal health economics at veterinary schools and through workshops at veterinary epidemiology conferences continues to develop scientists and veterinary professionals for this important task.”