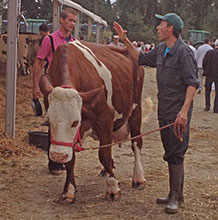 A new initiative to help farmers effectively plan who will take over their farms is being announced at the Royal Cornwall Show on 5 June. The University of Exeter’s Centre for Rural Policy in partnership with NFU Mutual, a leading rural insurer, and Cornwall’s Rural Business School have developed the first UK-wide academic study of succession farming.

The research project also involves a series of seminars that will take place around the UK to provide farmers with information on the options available to them to hand on their farms while treating all family members fairly. They will also help farmers find ways to broach the delicate topic without causing family disputes.

The Centre for Rural Policy has a long track record of applied rural policy research involving social scientists focusing on all aspects of the rural economy and society. Professor Matt Lobley, Co-Director of the Centre for Rural Policy Research, said:“Planning for succession and retirement requires much more than addressing the tax and legal issues. It can often involve difficult conversations and is something that many people put off. Our programme of events with farming families backed up with the first UK-wide academic study of farming succession is designed to put the need for forward planning of succession and retirement firmly on the agenda of the UK’s farming families.”

The Rural Business School have been involved in succession planning for some time, working alongside partner organisations such as the University of Exeter. Richard Soffe, Head of the Rural Business School said:“Our experience in helping farmers plan their finances means we can play a useful role in raising awareness of the issues around succession planning and providing the tools farming businesses and families need to make informed choices. We’re delighted to be able to work alongside NFU Mutual to get the message and practical guidance out to as many people as possible.”

The farming succession research project intends to help farming families across the UK hold meaningful succession planning and provide practical tools and guidance to the farming community. Lindsay Sinclair, NFU Mutual Chief Executive who will be announcing the partnership at the Royal Cornwall Show, said:“As a mutual dedicated to farming and rural communities, NFU Mutual supports its members on issues of concern and importance. And it’s very clear that in today’s highly competitive agricultural marketplace farmers who plan ahead to make the best of their resources are going to be best placed to thrive and grow.

“However, the daily pressure of coping with whatever the weather chooses to do, the fickle commodity markets, and the hundreds of tasks which farming involves means that taking steps to make long-term plans can easily be put on the back burner. That’s particularly the case on livestock farms where the day to day workload makes it hard to take time out for planning.”