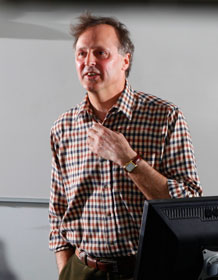 Professor Michael Winter, Co-Director of the Centre for Rural Policy Research, gave a keynote speech at the Next Generation Conference at Bicton College. He said “A serious debate was needed at national level to decide on the future of GM crops”. Speaking to an audience of 100 farmers and agricultural professionals, he added "I am absolutely convinced we have to go down the GM route – but we must not be led by Monsanto and Syngenta. The public interest needs to be fully represented. To face the challenges ahead we have to use everything available in the tool-box, and that means not ruling out GM, but ruling it entirely in. We need to be researching new kinds of crops."

The Conference was held to examine ways of reducing fossil-fuel use on the farm. Professor Winter said a single gallon of petrol contained the energy equivalent of three weeks of human labour at 40 hours per week – and 1,000 hours of human labour could achieve what a tractor could do in ten hours. So the benefits of using fossil fuels had been obvious. But current input costs were far too high, and the culture was unsustainable. Energy costs £160 per hectare for arable farming and £130 per hectare for dairying – and even organic farming was not much less.

Professor Winter pointed out that 80% of the world's food came from just 12 plant types, when, over the years, 30,000 different plants had been used for human food. So research was urgently needed, "and that means using brain power", he said.

Farmers, scientists and policy makers had to pull together in an effort to solve the challenges.