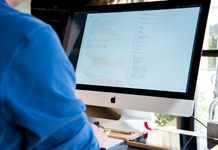 It is hoped the findings will strengthen the capabilities of UK intelligence services to combat propaganda.

University of Exeter experts will collect large amounts of propaganda put on the internet by Islamic State terrorists in real time to understand how it radicalises people.

The group is well-known for its use of social media to elicit fear and communicate and promote its ideology. Academics will harvest and analyse this content, and use this huge amount of information to understand more about the themes, issues and claims made by ISIS.

It is hoped the findings will strengthen the capabilities of UK intelligence services to combat propaganda initiatives of violent organisations.

Researchers involved in the study will conduct a large-scale, computer-assisted analysis of video and text. They hope to identify how ISIS’ online propaganda encourages individuals to commit to political extremism and violence.

Analysing the propaganda will allow academics to evaluate how ISIS’ online content makes use of polarizing language known to foster intergroup conflict. The academics will examine the language used and the structure of the propaganda to give a clear picture of the arguments made by ISIS in support of terrorism.

Dr Baele said: “We are thrilled that this CREST grant allows us to examine ISIS' online propaganda. We are certainly not the first to work on this crucial issue, but our research has two unique aspects that will significantly enhance our understanding of this complex phenomenon.

“We will make use of powerful, computational techniques to detect, gather, and analyse this propaganda. We will also use our knowledge of cognition and perception to make sense of the data we collected. By combining rigorous methods and in-depth explanations, we ultimately hope to contribute to ongoing and future efforts to stop the appeal of violent organisations.”

This is one of a range of projects set up to address some of the security threats facing the UK funded by the Centre for Research and Evidence on Security Threats (CREST), which is led by Lancaster University.

Director of CREST, Professor Paul Taylor, said: “We were delighted with the outstanding response to our call. Standing out against stiff competition, the successful projects promise innovation, rigour, and results that will make a difference to how we understand and counter security threats. I am looking forward to working with them.”