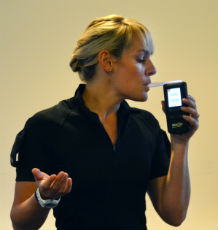 Licensed premises will be able to set an alcohol limit for their businesses and refuse entry to people who produce a reading which exceeds this limit. Picture by Dorset Police.

Official launch of the #RU2Drunk breathalyser scheme in Weymouth

Suspected drunks trying to get into pubs and clubs in Weymouth could be breathalysed and refused entry from Friday 16 September, as part of a new scheme to cut alcohol-related crime.

#RU2Drunk is a scheme designed to stop excessive “pre-drinking,” keep people safe and ensure there is a vibrant night-time economy in the town.

#RU2Drunk is being implemented thanks to a joint effort from Dorset Police, the Office of the Police and Crime Commissioner (OPCC) and Weymouth Business Improvement District (BID).

University of Exeter sociologists, Katharine Boyd and Hannah Farrimond, are leading an evaluation of #RU2Drunk in Weymouth with funding from the Economic & Social Research Council Impact Acceleration Account (ESRC-IAA).

The 29 licensed premises in the town that have initially signed up to the scheme have today received breathalyser training from Dorset Police at a launch event. They will be able to set an alcohol limit for their businesses and refuse entry to people who produce a reading which exceeds this limit.

An Office for National Statistics report released last year revealed that in 47 per cent of violent incidents, the victim perceived the offender to be under the influence of alcohol. In Dorset, over a one year period, almost one of in four of the perpetrators of violent crime were affected by alcohol.

Dr Katharine Boyd, Senior Lecture in Criminology at the University of Exeter, said: “Everyone wants to have an enjoyable evening when they go out, and this is one extra tool people working in the night-time economy can use to help keep people and staff safe, and prevent violence and crime.

“Using a breathalyser can diffuse conflict between the door staff and patrons who appear too drunk to go into a pub or club. When people see the breathalyser reading they are less likely to argue back.”

Weymouth Neighbourhood Inspector, Pete Browning, said: “The Force is committed to employing evidence-based policing, so it is great to be working with experts in their fields from the University of Exeter to keep alcohol-related crime down in one of the county’s busiest nightspots.

“Their research has already produced some fantastic results in Torquay, where during a pilot of the #RU2Drunk scheme over the Christmas period, police experienced a 39 per cent reduction in violent crime in the town’s busiest night spots.”

Dorset Police is aiming to emulate these results, ensuring Weymouth remains a safe place to live and visit.

“Dorset’s night time economy is a hugely important asset which I am committed to ensuring is protected. Supporting this scheme will empower licenced premises and benefit residents and visitors in the county.”

The project is being jointly funded by the OPCC and Weymouth BID.

Steve Newstead, Chair of Weymouth BID, said: “The BID project is about securing investment to help promote the town and guaranteeing improvement in trade, footfall and Weymouth’s wider profile.”

Minimising this excessive “pre-drinking” is at the heart of the #RU2Drunk scheme. This practice has all the safety implications of excessive drinking while out in the town, with the added danger that trained and responsible staff are unable to monitor how much alcohol is being consumed. The late arrival of heavily intoxicated guests into Weymouth’s establishments also stands to threaten the survival of businesses in the town.

Keith Treggiden, Chair of Pub Watch in Weymouth, added: “Pubs, clubs and bars bear the brunt of the issues associated with people coming out late, having already consumed large amounts of alcohol at home.

“It makes businesses more vulnerable, with poor trade as a result of excessive pre-drinking imposing the threat of closure.

“This scheme will benefit premise owners, as well as all those who are seeking to enjoy their evenings in our town safely and responsibly.”