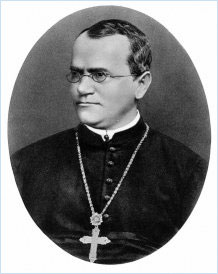 For decades the “father of genetics” Gregor Mendel has been portrayed as living an isolated, monk-like existence, cut off from society.

Now a new translation of one of Mendel's seminal works – published in a unique, interactive format – shows he was far more influenced by his environment than had been assumed, and deeply engaged with intellectual, economic and political developments of the time.

Mendel's report of his meticulous experiments on green or yellow, smooth or wrinkled pea varieties went on to inspire the establishment of a new science of inheritance, eventually called "genetics."

The new translation of the 1866 paper which inspired later geneticists, Experiments on Plant Hybrids, allows for a new assessment of the way Mendel worked, sheds new insight into the creation of the paper and opens a window onto the original German text.

As well as showing that Mendel - assumed to have lived a monk-like secluded life - was fully involved with his local community, it also suggests he engaged with contemporary theories of evolution, especially Darwin's, much more than previously thought.

Mendel's work was virtually unknown outside specialist circles until 1900, when three European botanists working on heredity and evolution claimed to rediscover his data and explanations. While most biology textbooks portray Mendel as the founding father of genetics, there has been a long-running debate amongst philosophers and historians about what exactly he discovered and whether he indeed laid the foundations of the science of genetics.

Mendel worked and taught at the Augustinian Abbey of St Thomas in Brno, in what is now the Czech Republic, and spent a decade carrying out experiments to investigate the patterns of inheritance. He used mice, bees and fuchsias before concentrating on pea plants. He studied the inheritance of their different features, and found they had dominant and recessive traits, and were inherited independently. Mendel set aside his scientific work when he became Abbott of the monastery.

The new online translation by Dr Staffan Müller-Wille, from the University of Exeter, and Dr Kersten Hall, from the University of Leeds, is published by The British Society for the History of Science. It is the first in a new series of translations that the Society is publishing with the aim of making important texts in the history of science accessible to the general public.

Using a unique web design, Mendel's original work is presented side by side with the English translation. This allows readers to move easily between the original German paper, the English translation, and sentence-by-sentence commentaries that discuss the scientific and political meanings of words and phrases Mendel used and draw on the latest scholarship on Mendel and his world.

Dr Muller-Wille said: "Mendel was also interested in practical matters, including breeding sheep and cereals. His discoveries were shaped by the environment he lived in, he wasn't isolated as previously thought. This shows how for scientists laboratory walls are always permeable."

Dr Hall added: "If Gregor Mendel could be transported from the tranquillity of his 19th-century monastery garden to 2017, he would probably be both highly flattered but at the same time utterly bewildered to see our biology textbooks hailing him as the founding father of modern genetics.

“We hope that our new translation will offer invaluable new insights into the ongoing debate amongst philosophers and historians about what he was really up to with his famous pea plants."