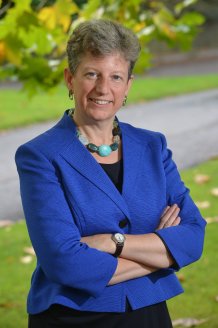 One of the UK’s leading social scientists is joining the University of Exeter from her previous post as Chief Executive of the Economic & Social Research Council (ESRC).

Professor Jane Elliott is currently also International Champion for Research Councils UK, and an elected member of the Governing Board of Science Europe and Visiting Fellow at Nuffield College, Oxford.

Jane will join the University’s College of Social Sciences and International studies as Professor of Sociology in September. She said: “I’m delighted to join a University with strong synergies in my research areas. Exeter is an attractive place to be, both geographically and having soared up the rankings over the past decade. It is a vibrant University and I’m very much looking forward to building strong research collaborations and contributing to teaching the next generation of social scientists at Exeter.”

Jane joined the ESRC in 2014. Prior to this she was Professor of Sociology and Head of the Department of Quantitative Social Sciences, at the Institute of Education (IOE), University of London as well as Director of the ESRC-funded Centre for Longitudinal Studies (CLS) which manages the 1958, 1970 and Millennium Birth Cohort studies, together with the Longitudinal Study of Young People in England (now known as Next Steps). In 2012 Jane became the founding Director of the Cohorts and Longitudinal Studies Enhancement Resources (CLOSER) programme.

Jane joined the IOE in July 2004 as the Director of the 1958 and 1970 British Birth Cohort studies. She became Executive Director of CLS in 2007 and then Director from April 2010. In 2007 Jane was instrumental in securing funding from ESRC to conduct a set of over 200 qualitative interviews with members of the 1958 cohort at age fifty. These interviews have all been transcribed, anonymised and lodged with the UK Data Service so that they can be used by the wider research community. These interviews represent the first major qualitative data resource alongside detailed quantitative longitudinal data.

Jane’s first book ‘Using Narrative in Social Research: Qualitative and Quantitative Approaches’ was published by Sage in 2005. Jane has also produced a second edition of the book ‘Exploring Data’, published by Polity Press in 2010.

Professor Sir Steve Smith, Vice Chancellor and Chief Executive of the University of Exeter, said: “As a social scientist myself, I am so pleased to welcome Jane to Exeter, as part of our ongoing drive to attract even more high-quality academics to Exeter. She brings with her an outstanding body of research, and a wealth of invaluable experience in leadership roles for some of the country’s leading research institutions.”