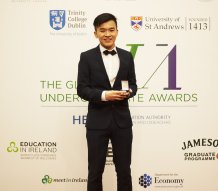 The winning student from the University of Exeter was presented with the Thomas Clarkson Gold Medal at The Global Undergraduate Summit in Dublin, Ireland.

Shamus Lee was the Global Winner in the Economics category for his paper “Does degree class matter? The effects of degree classification on graduate earnings.”

A group of the world’s top performing students gathered in Dublin to take part in the Global Undergraduate Summit, a 3-day conference where students from 60 universities, 19 countries and 25 different categories gathered to collaborate and share research.

In total, The Global Undergraduate Awards (UA) received more than 4,800 submissions to the 2018 programme from undergraduates in 333 universities from 46 countries.

Exeter’s Rachel Pain was highly commended for her paper “Does Feminist Theory Today Need the Concept of Gender?” in the Philosophy category.

Executive Director of UA, Dr. Garret Maher spoke of the significance of the Global Undergraduate Summit: “It is about much more than highlighting the top 150 contributors; it encourages cross-discipline collaboration, helps young students understand their responsibility to engage in issues of global importance and encourages debate in an atmosphere of solidarity. This experience will contribute to how they conduct their professional lives in the future; that Ireland is the source of this makes an impression on young women and men, many of whom will have positions of leadership and authority in the future.”

The Global Winners received the Thomas Clarkson Gray Gold Medal, named after the man who was described by the poet, Samuel Coleridge as ‘a moral steam engine’. The Chairman of UA, Jim Barry, said the naming of the Medal after Clarkson was very deliberate. “As a young man, Clarkson had won his first prize for an essay on slavery and then dedicated his whole life to its abolition in the British Empire, something he saw achieved by an Act of Parliament in 1833.  The Undergraduate Awards has exactly that ambition – that young men and women across the globe would address their academic talents to matters of significance in all fields of learning in the hope that it would spark their passion to be change makers and leaders into the future.”