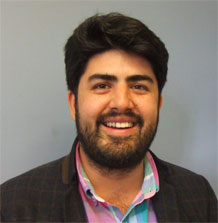 I am a Science and Technology Studies scholar working in the fields of biomedicine, forensics and citizen science. I conduct in-depth ethnographic research of race & genomics, and develop participatory action research models to intervene in humanitarian crises via DNA bio banking, grass-roots databases, and citizen-led science.

I am currently developing research on data justice, citizen-sensing and alternative approaches to scientific innovation in the Global South in spaces like Mexico, Colombia and Indonesia. My current research projects are: Mobile Solutions Against the Mexican Kidnapping Epidemic (Newton Fund-ESRC 2016-19) and Data Justice in Mexico's Multiveillant Society (ESRC Transformative 2018-20). My research has attracted vast public attention since Mexicans are currently dealing with more than 61,000 disappearances (according to the Mexican government) in a context characterised by the complicity of authorities and organised crime. For a brief audio-visual taste of Citizen-Led Forensic watch:

In 2015 we co-created an independent forensic DNA database –with ~500 samples and ~1000 testimonials of violence– that was tailored to the needs, expertise & sensitivities of relatives of the disappeared (www.cienciaforenseciudadana.org). I also coproduced training materials & on-line tutorials for collecting forensic DNA and a song to reach communities in which radio was the main form of communication (ES/M00063X/1). In our Newton Fund project Mobile Solutions Against the Mexican Kidnapping Epidemic (MAKE), centred in digital technologies (ES/P005918/1), I led the creation of a suite of CLS approaches to combat kidnapping in Mexico, including:

Also, some links to the project webpage of my previous ESRC transformative research, Citizen -Led Forensics project 2014-2016 (translated by our local partners to English):