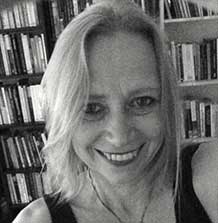 Astrid works at the intersections of Science and Technology Studies (STS), Human-Animal Studies and Feminist and Poststructuralist Theories.

She joined the University of Exeter in the autumn of 2013 as a HASS Research Fellow and became a lecturer in SPA in 2016. She previously held postdoctoral fellowships at York University, Toronto, the University of Pittsburgh and the Pembroke Center at Brown University and taught Science, Technology & Society Studies at Sarah Lawrence College in Bronxville, NY. Astrid received her PhD in History of Consciousness and Feminist Studies from the University of California, Santa Cruz. She also holds a MSc (UC Santa Cruz) and a  Diplom (TU Berlin) in physics.

Astrid's work explores questions of responsibility, care and agency in scientific knowledge production, new ontologies, the relationship between anthropocentrism and conceptions of time, and questions of environmental justice. She has been particularly interested in scientific research and policy decisions about so-called Harmful Algal Blooms. A recent project examined the scientific reconfigurations of life and death through research into programmed cell death in unicellular marine microbes.  Her current projects explores the linking of bio- and geo-rhythms in marine algae and other ocean critters and how they may affect timescales of 'our' concerns in the face of global warming. Under the heading of "Caring with Microbes" she develops new theoretical approaches in STS and 'new materialisms', combining 'agential realism' and 'biodeconstruction'. Working with artists and marine scientists, she also seeks to develop new appraoches to and methodologies in cross-disciplinarity.

Astrid is a member of EASE and Egenis research group.

Vicki Kirby, Astrid Schrader, Ezster Timar (2018) “How do we do biodeconstruction?” for a special issue on ‘biodeconstruction’ in Postmodern Culture (PMC) ed. Erin Obodiac

Schrader A. (2015) “Abyssal Intimacies: How (Not) To Care About Deformed Leaf Bugs in the Aftermath of Chernobyl?” special issue “The Politics of Care in Technoscience,” Social Studies of Science

Schrader A. with Sophia Roosth (2012), “Feminist Theory Out of Science: Introduction”, differences: a journal of feminist cultural studies 23(3): 1-8.

I'd be delighted to supervise any project aligned with my research interest in:

Ellen Lesser (2nd supervisor), "The capacity of nonhuman animals to be aware of God"