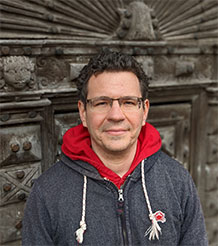 I was born in Budapest, Hungary. I studied History and Arabic at Pázmány Péter Catholic University (MA-s in 2000). My PhD in Arabic Studies is from Eötvös Lóránd University and the Université de Toulouse 2, Le Mirail (2006).  A largely updated and revised version of his dissertation was published under the title of La Pensée d’Ibn al-Muqaffaʽ

My academic studies have been supplemented by the enriching opportunity to work as a cultural guide in more than twenty countries throughout Europe, the Middle East, South Asia and Latin America. I speak in Hungarian, English, Arabic, French, Italian, Spanish, and used to be able to read Latin.

During my undergraduate and MA studies I was awarded with scholarships at the Universitá degli Studi di Napoli “l’Orientale”, the Pontificio Instituto di Studi Arabi e Islamici, the Institut Catholique de Toulouse, the Institut du Monde Arabe and Princeton University. I also received scholarships in different Arab countries such as Tunisia, Morocco and Egypt.

After the completion of my doctoral studies, I received a Sultan Post Doctoral Fellowship at the University of California, Berkeley and a Mellon Career Development Fellowship in Classical Arabic at the University of Oxford. I taught as a visiting professor at the University of Richmond, Virginia, in the fall of 2009. I declined a Mellon Fellowship at the Netherlands Institute for Advanced Study in order to come to Exeter where I spent three years as a research fellow in Professor Robert Gleave’s Legitimate and Illegitimate Violence in Islamic Thought (LIVIT) project between January 2010 and December 2013. The proceedings of the conferences organised in the framework of this project are published in a series by Edinburgh University Press:

The title of the first volume is Violence in Islamic Thought from the Qurʾān to the Mongols.

The title of the second volume is Violence in Islamic Thought from the Mongols to Europan Imperialism.

While holding this fellowship I was also granted a Mellon Research Fellowship at the Instituto de Lenguas y Culturas del Mediterráneo y Oriente Próximo of the Consejo Superior de Investigaciones Científicas, Madrid in 2011.

My lectureship at the IAIS started in January 2013 and my senior lectureship in July 2018.

I am a member of the Centre for the Study of Islam.

My main scholarly interests lie in comparative and interdisciplinary studies, especially the social and cultural history of Islam as compared and linked to other civilisations. My research has been centred on the formative period, the evolution of the Arabic adab, Islamicate political thought and wisdom literature. I am highly interested in the interaction between the social structures and the individual; what are the social structures which encourage individuals to fulfil their potential to the utmost, and what can individuals do to promote such structures in society. My research on Ibn al-Muqaffaʿ can be considered as a detailed case study of these questions, centred on one of the most important authors of Arabic literature and Islamicate thought.

During the LIVIT project, I was exploring the religious justifications for the legitimacy of the state’s violence against the individual. I focussed on the first inquisition and persecution in Islam, that of the Zanādiqa (Manicheans and other suspicious dualists) during the reign of two ʿAbbāsid caliphs, al-Mahdī and al-Hādī. This persecution is one of the most striking and less investigated examples of a violent campaign against a non-violent religious community within the Dār al-Islām. I have been also studying the figure of Iblīs (the Devil) as a symbol for individualism, often depicted as an inspirer of the arts and literature.

In addition to linking reflections on religion with those on society, I am trying to trace back fundamental questions of the humanities—such as religious and social phenomena—to geography and biology, and to explore connections between ethics, ethology and genetics.

Abbasid culture; social and intellectual history; art history; literature; political thought (mirrors for princes and advice literature); comparative studies between the early and classical Islam and other civilisations; Zandaqa (Manicheism and other forms of dualist thought); the kuttāb (administrative elite).