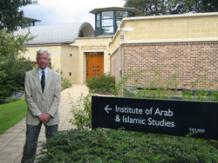 After studying Arabic at Durham University and the Middle East Centre for Arab Studies (MECAS) in Shemlan, Lebanon he became Director of Studies at MECAS between 1965-68 and 1970-75.

He lectured in Arabic and Islamic Studies at Edinburgh University between 1969-70 and thereafter taught Arabic in the United States : Columbia University in 1969 and the University of Pennsylvania in 1970.

In 1987 he founded the MECAS Association which now numbers around 500 alumni , most of whom studied at MECAS .

He has lectured in Arabic in many Arabic countries.

He interpreted for HM The Queen and Her Majesty's Government from 1983-2009.

As a University Fellow in retirement at Exeter he is active in consultancy on the teaching of Arabic as a foreign language.

As a historian he has specialized in the history of Saudi Arabia after publishing a biography of the first King, "  Ibn Saud " , in 1993.

2002   In a Sea of Knowledge: BRITISH ARABISTS IN THE TWENTIETH CENTURY , Ithaca Press

1995       AN APARTMENT CALLED FREEDOM, from the Arabic of Ghazi Algosaibli

Books on the teaching of Arabic

- A Course in Colloquial Arabic

- A Further  Course in Colloquial Arabic

Guide to Speech-making in Arabic , Exeter  ( Sent to all posts of the Foreign and Commonwealth Office)