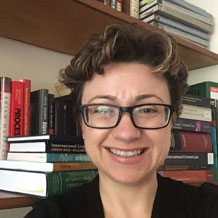 Dr Jachec-Neale is an expert researcher and lecturer with practical insight into how international law is applied in during armed conflict and in transitional and post-conflict environments. In addition to her position in Law School she has been affiliated with Strategy and Security Institute and Medical School here at the University of Exeter teaching in multidisciplinary settings.

Agnieszka has over five years’ experience alone working in the field missions in south eastern Europe, where she specialised in monitoring domestic war crimes trials and in the enforcement of human rights standards in emerging democracies. She has a unique field experience in serving throughout with the Kosovo crisis and in post-war Croatia with the Organization for Security and Cooperation in Europe (OSCE). In the past she has been involved in managing and implementing major projects and producing analytical as well multi-disciplinary reports in the fields of international humanitarian law and international human rights. This involved working on Legislationline.org project in OSCE Office for Democratic Institutions and Rule of Law in Warsaw and supporting work of Croatian Ombudsman.

Dr Jachec-Neale’s doctoral thesis was published by Routledge in 2015, when it became the first monograph on military objectives. In her book she explored the concept of ‘military objective’, which defines lawful targets during hostilities in the context of the Law of Armed Conflict. Apart from a comprehensive analysis of the elements of the definition, she has also examined how the definition works in practice, from two multidisciplinary angles. The resulting book received a number of positive reviews from experts in the field, including an extensive essay review by R. Kolb (Leiden Journal of International Law, Vol. 28, 2015).

Agnieszka is currently developing a study on a legal framework of protected objects in armed conflict. Specifically she is investigating the protective regime of the various categories of objects such as medical units/hospitals, civilian objects including schools, residential buildings and other categories such UN peacekeeping missions’  facilities and critical infrastructure. As a part of her research she is examining the impact of the destruction of cultural property and protective status of religious protected sites during armed conflict such as mosques and churches.

2006-2007: Member, British Institute of International and Comparative Law EU-Sponsored Project on Promotion of Human Rights and Democracy in Iran

Peter Barker, ‘The Right of Transit Passage in International Law of the Sea – its past development and future challenges’, co-supervised with Professor Michael N. Schmitt