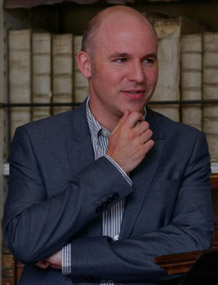 My teaching and research are primarily in the history of early modern political thought with a particular focus on the writings of Mary Wollstonecraft, Edmund Burke, David Hume, the Third Earl of Shaftesbury, and Alexis de Tocqueville. Thematically my work mainly deals with issues surrounding the passions, ridicule, fanaticism, religious toleration, and censorship.  My first book Uncivil Mirth: Ridicule in Enlightenment Britain was published by Princeton University Press in 2021.

My research interests are mainly in the history of early modern political thought. My first book Uncivil Mirth: Ridicule in Enlightenment Britain (Princeton UP, 2021) reconstructs the Enlightenment debate over the purpose and propriety of ridicule as a weapon of dispute. The debate was ignited in 1708 by the Third Earl of Shaftesbury who defended ridicule as an antidote to religious fanaticism. The book shows how Shaftesbury's readers worried that ridicule could coarsen politics, cause undeserved humiliation for many, and sow civil strife. At the same time, they also saw ridicule as a potent instrument for advancing various causes of reform including religious toleration, civic education, and the abolition of the slave trade.  Further details can be found here.

My future research projects include the following:

·  A chapter entitled 'Eloquence and Liberty in Hume’s Essays' for the Cambridge Guide to Hume's Essays.

·  An introductory book on the political thought of Edmund Burke (under contract with Polity Press).

·  A monograph called An Inconsequential Democrat: Gustave de Beaumont in the Shadow of Tocqueville. This book will aim at recovering Gustave de Beaumont (best known as Tocqueville's travelling companion) as a theorist of democracy and immanent critic of European settler colonialism within the French liberal tradition.

I am available to supervise PhD students in any theme of early modern political thought including the passions, toleration, civility, republicanism, constitutionalism, and poltitical economy.

My early education was in my native Ireland. I completed a BA in politics and philosophy at University College Dublin before leaving for England to complete a Msc in International Relations at the London School of Economics.  Following a brief period working in Brussels I travelled to the United States on a Fulbright scholarship and received a doctorate in political science from Northwestern University in 2013 for a dissertation on the politics of enthusiasm in Shaftesbury, Hume, and Burke.  From 2009 to 2012 I served as Assistant Editor of Political Theory: an International Journal of Political Philosophy. Before arriving at Exeter in the autumn of 2015 I spent two years as Visiting Assistant Professor of Government at the College of William and Mary in Virginia.