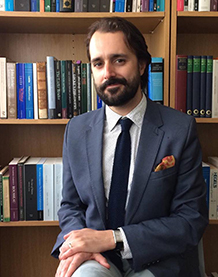 My research and teaching interests are in the history of political thought and contemporary political philosophy. In the historical sphere, my main interests concern modern liberal thought, as well as the philosophical and methodological problems involved in the interpretation of past ideas. My interests in contemporary political theory are primarily in conceptual and normative debates about property ownership and human rights.

My research interests are mainly in the following areas:

Philosophy of History - philosophical and methodological issues in the history of ideas, especially the nature of interpretation and historical meaning.

My book Thomas Paine and the Idea of Human Rights (Cambridge University Press, 2015) brings together my various research interests: it analyses Paine's texts, interpreting them as comprising a coherent account of liberal rights. In the monograph, I discuss Paine's ideas about human equality, the nature of rights, the grounds for (and limits to) political obligation, democracy and representation, property ownership and welfare, international relations and religion. In addition to offering (hopefully) novel interpretations of Paine's thought, I try to demonstrate his historical and philosophical distinctness within modern liberalism, and also show how entering into interpretive dialogues with past thinkers can be philosophically productive.

I would be happy to hear from prospective doctoral students working on any areas related to my research interests.

I was born and raised in the beautiful, post-industrial west of Scotland, though going back just a couple of generations, the various roots of my family lie elsewhere - hailing from the Inner Hebrides, Berwickshire, and County Fermanagh on my father's side, and Liguria and Tuscany in Italy on my mother's. After an inspiring undergraduate education - reading Politics and History - at Strathclyde, I headed south to take the MA in Political Philosophy at York (then a programme sponsored by the Morrell Centre for Toleration), where I learned a great deal about historical and contemporary liberalism from my peers and from my teachers, including my now colleague at Exeter, Professor Catriona McKinnon.

I first moved to Exeter in 2002, to write a doctoral thesis - on British radical political thought in the 1790s - under the supervision of Professor Iain Hampsher-Monk. I was appointed to a permanent lectureship in 2006, initially as a joint appointment between Politics and Philosophy departments, and completed my PhD the following year. My research is quite diverse in terms of thinkers and concepts within the broadly liberal tradition, and an abiding aim of it has been to show how historical understandings can be brought to bear on contemporary philosophical discussions - to show how historical interpretation can, in itself, be a form of political theorizing.

As a member of the Centre for Political Thought, I have helped continue the Exeter tradition of teaching political theory historically, while also developing modules on contemporary political philosophy. I have also taken on the three major leadership roles within the Politics department, serving as Director of Education (2010-2012), Director of Research (2015-2017), and Head of Department (2017 - 2020). I was promoted to a Personal Chair in 2019.

I have held visiting fellowships at UC Berkeley (Center for British Studies, Autumn 2007), the University of St. Andrews (Centre for Ethics, Philosophy and Public Affairs, Spring 2010) and the University of Sydney (Institute for Democracy and Human Rights, Spring 2013). From August 2019, I will be the interim Director of the university's new, cross-college, Humanities Research Institute, which will provide a forum to bring together scholars from both of our campuses to develop and support emerging research across all humanities disciplines.

Away from university life, my interests include unambitious rambling towards country pubs, playing 5-a-side football (with steadily diminishing prowess) and occasionally chess, listening to country music, and making much of my semi-Italian heritage through love of Italian food, wine, films, and football. I regularly head back home to Scotland and also to Texas to visit my wife's family. Most of my heroes are fictional detectives.