Archaeological research on the origins of Harar, Ethiopia 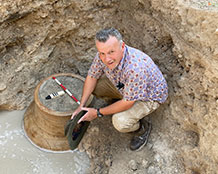 This project is exploring Islamisation processes and contexts through archaeological research in Harar, Eastern Ethiopia. Harar is the most important living Islamic centre in northeast Africa, sometimes referred to as the 'Timbuktu’ of Ethiopia. Harar was and is a centre for Islamisation and the focus of both trade and Muslim pilgrimage routes that connect it to its wider region. Despite its importance, the origins of the city remain obscure, with traditions giving foundation dates variously of the 7th, 10th, and mid-16th centuries AD. The importance of Harar is reflected in the listing of the Old City as a UNESCO World Heritage Site that contains within its wall, the djugel, approximately 2000 houses, 82 mosques, and over 100 saints’ tombs and shrines. The fieldwork has five main aims.

1. Assessing the origins of Harar through establishing an occupation chronology.

2. Assessing the role of Harar in regional trade, religious and political networks.

3. Providing information on Islamisation processes in Harar and the wider region.

4. Examining the importance of regional and long distance trade over time.

The research is being completed in partnership and with the full approval of the Ethiopian Authority for Research and Conservation of Cultural Heritage (ARCCH). The project results will be presented to the local community in Harar through a Museum exhibition and to academia via a monograph and two journal articles.