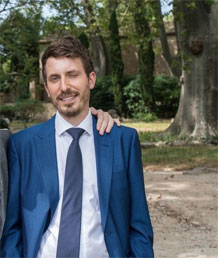 I am anthropologist (DPhil Oxford) of human-animal interactions. For nearly a decade, much of my work has been dedicated to examining the place of dogs and cats in South Korean urban society and culture, a particularly complex and interesting research area that touches on cultural relativism and imperialism, the use of animals in national identity rhetoric, the legitimacy of food taboos, speciesism, the question of violence within the debates between welfarist and abolitionist approaches to human-animal interactions, racialisation, and ontological perfusion in urban marketplaces.

My monograph, Dogs and Cats in South Korea: Itinerant Commodities, based on extensive fieldwork in the greater Seoul area, has just been published with Purdue University Press.

Abstract
Dogs and Cats in South Korea: Itinerant Commodities shows that though dogs and cats are consumed in the millions each year, they are recipients of both cruelty and care in a very unique way compared to other animal species in South Korean society. The anti-imperialist and postcolonial stances associated with the consumption of dogs and cats in South Korea are oversimplistic. Stereotypes by societies that do not eat these animals overshadow the various ways in which South Korean citizens interact with them, including companionship. In fact, many dogs and cats go from companion to livestock, and from livestock to companion, demonstrating that the relationships with these creatures are not only complex, but also fluid. The trajectories of the lives of dogs and cats are never linear. In that sense, individual dogs and cats in South Korea are itinerant animals navigating an exchange system based on culture, economics, and politics. With nuance and cultural understanding, Dugnoille tells the complicated stories of these animals in South Korea, as well as the humans who commoditize and singularize them.

*Many more are forthcoming*

This long-term research explores (since 2012) how South Koreans engage with ideologies about zootherapy, pure blood and ethnicity beyond the human world when justifying the use of nonhuman animals as curative commodities. I also explored South Korean civil discourses which emphasise a clear pet vs. food boundary with an ethnographic approach to the dog-meat trade which reveals that this taxonomy doesn’t represent how dogs are commoditised in practice. I have also shown how digital photography of human–animal relations empowers South Koreans with the capability to express their own views on tradition, social change and cultural stereotypes. Moreover, I have explored how animal activists deploy rescue narratives so as to attract adopting families, thus transforming people's perception of livestock animals into that of potential lifetime companions

Book and journal articles related to this research:

I am collaborating with Frédéric Keck (Collège de France, Directeur du Laboratoire d'Anthropologie Sociale (LAS)) and Miwon Seo-Plu (Ecole des Hautes Etudes en Sciences Sociales (EHESS), Centre Chine, Corée, Japon (CCJ)), on a research project entitled 'Regulating Wetmarkets in Central China: Ethnographic study of the perception of zoonotic risks after the COVID-19 crisis', funded by the Agence nationale de la recherche (ANP). We are exploring the impact of the current pandemic on "wet markets" in some of the places I researched over the past ten years. This actualises the findings I have produced since 2012 on the consumption and production of dog meat in South Korea. Our findings will be published in the near future.

With this research, I investigated how travel images of North Korean destinations are produced in South Korean advertising organisations and are commoditised, and consumed, as South Korean cultural products. I focused on a particular mountain on the border between China and North Korea, ‘Paekdusan’, believed to be the mythological cradle of the Korean people. I shared my findings at the Academy of Korean Studies (AKS)’s bi-annual conference in 2012, where I won the Junior Paper Prize Award.

HOW AN IMAGE MAKES PEOPLE MOVE

This research explores drama ethnographically on and off the stage. I focus on movement in a theatre production, in the sense of physical motion, the audience’s mobilisation process and the cast’s positionalities vis-à-vis the play’s symbolic reality.

In light of Woodford’s work on a Neo-Aristotelian approach to animal behaviour, added to a queer perspective on nonhuman sexual activity, and in light of debates about “natural fallacies” in the history and philosophy of life sciences, I show that approaching nonhuman sexual activity without looking for ways to explain it in the context of reproduction could allow ethologists to move away from these heteronormative tropes more easily and open up new ways of accounting for sexual activity in their research design and public communication. My findings will be published in the near future.

With this research, I apply the Satrian existentialist framework of ‘The Look’ to the experiences of human-nonhuman intersubjectivity, which were expressed to me by a handful of small-scale farmers in France and in England. I also explore human-animal interactions through the lens of contemporary debates about commodification so as to articulate the feelings of dissonance experienced by populations who thingify sentient beings

Papers related to this research:

I welcome enquiries from prospective MA, MPhil and PhD students. Some of my students work on slaughterhouse visibility in the UK, Ireland and Denmark, the commodification of lions in French and Belgian circuses, the phenomenology of disgust in a Londonian butchery, the inclusion of nonhuman animals in a concept of peace, neo-paganism, etc.

CURRENT AND PAST PHD STUDENTS (SELECTED)

The visibility of animal slaughter in Denmark contrasts starkly with the modes of concealment typical of slaughterhouses in industrialised societies. Members of the public can enter a pig slaughterhouse and participate in a tour of the facility, tracking the animal from the slaughterhouse gate to the dinner plate. Interestingly, Denmark boasts one of the highest meat consumption rates in the world. This transparency of animal slaughter transcends the slaughterhouse to other arenas of animal consumption. My ESRC-funded PhD will involve a 13-month ethnographic fieldwork wherein I will interrogate Danish cultural attitudes towards animals and explore how these are influenced by visibility of animal consumptive practices. In collaboration with Copenhagen Zoo, I will conduct participant observation as well as semi-structured interviews with staff. I will carry out a significant ethnographic study of a Danish slaughterhouse using a variety of sociological and anthropological research methods. In an effort to recreate the immersive experience of the slaughterhouse, I will utilise a background in visual anthropology in collaboration with two art galleries in the exhibition of my research material.

Sarah Thubron - Rethinking peace: examining the position of non-human animals and the significance of industrial animal farming in the UK - PhD Sociology

My research will examine the applicability of the ideas of peace and violence in industrial farming by analysing UK law, rhetoric and policy with regards to nonhuman animals as well as how the notion of violence is used and performed at the level of those actually involved in handling animals. The project will examine these ideas in the context of sheep farming within the UK, paying particular attention to the transition from farm to slaughterhouse and the process of live animal transport. The research will be conducted using an interdisciplinary approach, involving text and discourse analysis of relevant political and legal outputs as well as ethnographic fieldwork, to examine whether the definition and perceived occurrence of violence differs according to what status the animals are accorded at each stage of the production process. In highlighting why the treatment of nonhuman animals in intensive farming is relevant to how peace is striven for in the UK, the research will ultimately question whether current UK policy can truly be said to be peaceful.

Circus tradition that includes a central role for animal performance persists in France and is afforded governmental support and promotion through the Ministry of Culture. However, traditional circuses in Europe that perform with wild animals are being challenged publicly and altered through the enactment of legal bans on use of these animals, reflecting increasing unease with wild animal performance in particular.  My PhD project involves multi-sited multispecies ethnographic research of current 21st century traditions of wild animal performance in circuses in France, to investigate circus discourse and the lives of animals caught within entertaining narratives. I will undertake fieldwork within three circuses that perform in and around Paris. I build on existing research that explores boundaries between humans and other animals in circuses to explore how traditions of wild animal performance in French circuses may trouble or blur boundaries between humans and other animals, and how it is possible to make “visible” the lived experiences of individual animals to understand more fully the bodily impact of these traditions. Ideas in biopower and phenomenology provide the theoretical frame for this research which is located at the crossroads of Anthrozoology, Ethnographic Anthropology and Applied Philosophy. The study produced will capture a rare analytical account of an oral and physical tradition, while also giving full consideration to animal experience, of benefit to scholars of performance but also to those considering the welfare of animals in circuses, with great potential to feed into policy discussions and decisions.

After finishing my BA in Philosophy at the Sorbonne (and working in the theatre industry on the side), I studied for an MA in ethnology at the Ecole des hautes études en sciences sociales (EHESS). I then moved to Oxford to get first an MSc in Visual Anthropology and then a DPhil in Anthropology. During my studies at Oxford, I was a visiting scholar at the University of Chicago under a Fulbright Fellowship, and a Korea Foundation Fellow. I joined Exeter in 2015 as a Lecturer in Anthropology.

In my free time, I appease my obsession for nineteenth-century European literature by reading and re-reading Emile Zola's work and other naturalist descriptions. I also love the work of Victor Hugo, Charles Mathurin and Leo Tolstoy to name but a few.