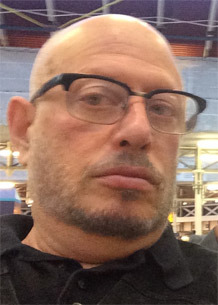 OFFICE HOURS:  Only during Fall Term (consult ELE pages for specifics or check with me by email).

My office is Amory 319.  The best way to contact me is by email (not by office phone).

I take the on-going divide between the natural sciences and the humanities to constitute a significant challenge not just to the unity and integrity of academia but to the well-being of our increasingly globalized civilization - a fissure that has only widened in the context of our 'post-modern' times. With interests in both the natural sciences and 'critical' social/psychological theory going back to my childhood, I have been oriented toward the possibilities for building bridges across this chasm as a central motivation of my academic/intellectual life.  I have been interested in taking issue with trends in the life-sciences that would appear to obviate the possibility of an understanding of life consonant with our own lived experience and the legitimacy of our aspirations for social solidary, justice and social freedom.  On the positive side, I have been interested in advancing a philosophy of nature consonant with these intentions and advancing a philosophical anthropology that does justice to both the 'naturalistic' empirical, as well the as normative and phenomenological sides of our human self-knowledge, self-experience, and moral/ethical aspirations.  The latter is also meant as a corrective to those in normative social theory who eschew any consideration of the findings of the life and human sciences.

My early laboratory work at UC Berkeley and at UC San Francisco Medical Center was oriented toward elucidating cell surface mechanisms, not directly genetically determined, relevant to the ability of metastatic breast cancer cells to evade the host immune system, and likewise studies on the developmental stages of the human placenta marked by changes in cell-surface chemistry that distinguish normal and malignant trajectories.  Interest in questions of cellular and organismic autonomy and agency have continued to be germane to my work as a scientifically informed philosopher and are central to a possible grant from the Templeton Foundation.

As an ELSI (Ethical, Legal, Social, Implications of the Human Genome) Fellow (1996-1997) I was required to serve as a participant/observer in clinical genetics clinics that counselled aspiring parents on the likelihood of a child being born with a heritable disease.  With an undergraduate degree in molecular biology and a PhD in comparative biochemistry I was very well acquainted with the molecular gene concept.  At the genetics clinic, I discovered that the word 'gene' was being used in a different sense, drawing upon classical genetics.   This distinction provided me with the analytic tools for offering an influential critique of the popularized, hyperbolic notion gene as 'master-molecule' which, as I argued, was based upon an illicit conflation of two otherwise independently valid gene concepts each situated in very different practical and epistemic contexts. My resulting book, What Genes Can't Do (MIT 2003) went well beyond the logical bare bones of this argument to provide a thick contextual history of the origins of both concepts, one of the earlier philosophico-theoretical histories and critiques of the continuing influence of the somatic-mutation hypothesis in oncology based upon current findings and some intimations of what a non-reductivistic biomolecular framework would look like.  The book was translated and published in Japanese in 2008 and continues to be referenced as one of the hallmark texts of contemporary bio-philosophical discussion.  I have since published seven articles in peer reviewed journals, and two invited book chapters, on topics in the philosophy of biology.

Rather than being composed of various sub-specialties (a relatively recent development in its disciplinary history), I take philosophy to be an integral, and not properly divisible, subject characterized by different, and perhaps we can say competing points of entry.  The idea of a philosophical anthropology that brings the natural sciences and philosophy together arose in the late 18th century, but the life and human sciences were not sufficiently developed to fully overcome a dualist legacy.  Philosophical Anthropology as a self-conscious enterprise reached its high-water mark in the early-mid 20th century with the work of biologist/philosophers Helmuth Plessner and Arnold Gehlen but became stalled by the cataclysms of the Second World war and the Holocaust.  My own work is widely seen as the leading edge of attempts to renew this enterprise in the 21st century Anglophone philosophical world, drawing upon the benefits of recent work in the relevant sciences, and introducing a number of novel concepts.  Since organizing the first major, international conference on philosophical anthropology in thirty years (Notre Dame, 2005), just before moving to Exeter, I have been elaborating my work in philosophical anthropology on a number of levels.  I have published seven invited book chapters, five articles in peer-reviewed journals, and recently wrote an extended review of the first English language publication of Helmuth Plessner's magnum opus Levels of Organic Life and the Human.  A full monograph entitled Natural Detachment, the Hybrid Hominin and the Gambit of Geist: A New Introduction to Philosophical Anthropology is currently in progress.

Introducing and promoting philosophical anthropology as the most illuminating point of entry into philosophy and the life and human sciences means building many cross-disciplinary bridges.  This is reflected in my long standing participation in the International Society for the History, Philosophy and Social Studies of Biology, the Prague Colloquium on Philosophy and Social Science, my visiting appointments in the Humanities Centers of Rice University and Grinnell College, and my many invited lectureships including those at the European Association of Social Anthropology, the Konrad Lorenz Institute, the Max-Weber-Kolleg for Cultural and Social Studies, the Jena Social Theory Colloquium, the Max Planck Institute, the Boston Colloquium for Philosophy of Science, the Helmuth Plessner Gesellschaft, as the Annual Alexander Humboldt Symposium speaker, and many more.  In current and forthcoming work I am engaging with investigators in the '4E' (Embodied, Embedded, Extended, Enactive) Cognitive Science and the Social Ontology communities.

My work in philosophy has drawn on the formative influences of three not obviously complementary sources, these are a long-standing interest and affinity with the socio-historically structured, practical/normative intentions of the Frankfurt School (especially Habermas and Honneth), extensive training and practice as a biochemist/biophysicist and molecular cell biologist, and yet also a realisation that there is much truth in the Heideggerian and neo-Heideggarian critique of philosophical intellectualism.  Much of my work has involved attempting to bring the resources from each of these perspectives to bear on the other two while at the same time seeking to develop an integrated perspective that can address systematic questions in philosophy generally. In the philosophy of biology, I have contributed to bringing an understanding of biological causation into a broader philosophical and scientific contextualization and I continue to be critical of both narrowly neo-Darwinian and "new-mechanism" theoretic approaches that fail to do justice either to the phenomenology of human (and other) life-forms or to the upshot of cutting edge, post-genomic, empirical research findings. Using a critique of Schrödinger's celebration of the solid state and its formative influence on the shaping of molecular biology as a point of departure, I've begun a new project which looks for fundaments of the living state in the peculiarly complex and ambivalent character of aqueous systems as elucidated in the emerging findings of condensed matter chemistry and physics. In recent work, in another direction, I've drawn upon interdisciplinary, including phenomenological, studies on the nature of expert skill acquisition, along with the under-appreciated legacy of German Philosophical Anthropology to suggest a framework for extending the domain of normative concern within Critical Theory from that limited by Habermas to the scope of the purely symbolic to that of our embodied, quasi-biological material relations in the world (and in so doing discovering a link to the "capabilities" approach of Sen and Nussbaum).  More generally stated, I am interested in problems of "nature and normativity" as they ramify into virtually every problem area of philosophy. In present work, for example, concerned with problems in the philosophy of mind and language, I am advancing a naturalistic account, drawing upon a novel concept of hominid/human "detachment", that claims to be able to mediate the tensions between the anti-cognivitivism of Dreyfus, the Sellarsian rationalism of McDowell and the expressive inferentialism of Brandom.  Mindful of both the increasingly pervasive interest in, and yet increasingly disparate approaches to, the further elaboration of a contemporary metaphysics, I've come to see my own integrative project as another contending direction of thought in this conversation and am looking toward a book length exposition of such.

* James Krueger (co-supervised with Alasdair MacIntyre) Philosophy of Biology and Medicine. Krueger is presently Associate Professor of Philosophy at the University of Redlands (USA).

* Güler Cansu Agören, on the History and the Ontology of Concept of Depression (in progress)

* Simon Young, on Heidegger's Philosophy of Language (in progress)

My interests in philosophy and science both go back to my early teens but they were conceived in very different contexts, and nurtured in very different moods. The twists and turns, engagements and disengagements that have led to their coming together have surely constituted a principal leitmotif of my intellectual life. Where my scientific intrigues may have been seduced by the well-crafted, pseudo-utopian rhetoric, arfully deployed in the New York Worlds Fair pavilions of Dupont Chemicals, General Electric and the like, and further developmentally embedded by early successes in the seventh grade chemistry classroom of Mrs. Chasen's philosophy has always had a very different status for me. As philosophy was hardly on the career menu in the projects and terraces of Queens and Brooklyn in which I grew up, it has always been about something special, ill-behaved, revelatory, critical and tinged with a giddy promise of liberation. (Nor have I even yet come to be able to countenance the standpoint of those for whom a career in philosophy is taken, not as a provocation of the marvellous, but rather as a somber birthright).

Not every experience that cultivates and conditions one's purchase on or in the world finds a place on one's academic vita. Before settling into a life as a research scientist I ran corned beef and pastrami for a Kosher-style deli on Wall Street, hawked souvenirs for the 6-feet-wide-by 60-feet-deep Aquarium gift shop on Coney Island's boardwalk, devoted two summers as a camp counsellor with brain-damaged and severely autistic children, washed pots and pans in the hot summer kitchen of Old Ebbit's Grill, endured the all-night, clean-up shift at the Sheraton Park Hotel, managed a non-profit 'radical' bookstore, founded a child-rearing commune, stuffed envelopes for the Washington Monthly, handled (albeit poorly) an off-set printing press for Tyler Buiness Services, set-up sherry-hour and searched the marijuana infused, back-stacks of the Library of Congress for the scholars (and political insiders) of the Woodrow Wilson International Center for Scholars when it was still housed in the Smithsonian's Castle on the Federal Mall, mixed bacterial media and autoclaved its finished fruit for San Francisco State University, and clocked-in for two and a half years with a former military intelligence officer named Carlton C. Crook ('It takes a Crook to catch a crook, Ma'am')  collecting evidence of corporate collusion amongst major oil companies for the California State Attorney's office (until a Republican was elected governor and shut it down).