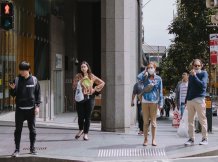 A third of people are in favour of prison sentences for those who break coronavirus lockdown rules, according to a major new survey.

The poll of 5,000 people shows the country is split on how harshly to treat those who don’t follow restrictions, with slightly greater numbers of the public objecting to the punishment, with 42 per cent disagreeing.

The survey, run by the University of Exeter and ORB International in England, shows people have followed legal rules introduced to curb the pandemic since March.

A total of 6 per cent of people thought the Government had done a very good job enforcing lockdown restrictions in England, 27 per cent thought it had done fairly well, 25 per cent fairly badly and 18 per cent very badly.

Professor Dan Stevens, from the University of Exeter, who led the survey, said: “As the pandemic continues, these results show some frustration and confusion among the public: including dim views of the government’s handling of aspects of the virus outbreak and a willingness among roughly one in three people to see restrictions more rigidly applied.

“As we enter a new phase of local lockdowns and evolving quarantine rules it will be interesting to see whether frustration eases or grows.”

A majority of those who took part in the research thought the government had done well in managing demand at NHS hospitals, but only a minority thought that it had handled social care, schools or enforcing lockdown restrictions well.

Just 4 per cent thought the Government had protected people in social care very well, 15 per cent fairly well and 28 per cent said they had acted fairly badly, and 34 per cent very badly.

Dr Katharine Tyler, from the University of Exeter, the project’s principal investigator, said: “This first wave of our survey shows that people have strong views about the government’s handling of the pandemic. In the next phrase of the research, we will build on these findings to conduct in-depth interviews with individuals about their experiences of the pandemic to further deepen our understanding of its impact on society and people’s lives.”