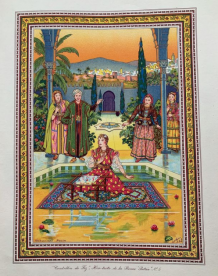 Using Instagram has allowed Professor William Gallois, from the University of Exeter, to publish almost 200 high-quality colour images with his academic article to illustrate the meaning and aesthetic value of Racim’s work.

The first research to be simultaneously co-published in an academic journal and on Instagram shows the lasting legacy of one of Algeria’s most influential modern artists.

The painter Mohammed Racim is generally known for his depictions of historical scenes produced in the colonial era. Such work has been used to illustrate book covers, tourist brochures and postage stamps, and has generally been seen as backward-looking and artistically conservative.

Using Instagram has allowed Professor William Gallois, from the University of Exeter, to publish almost 200 high-quality colour images with his academic article to illustrate the meaning and aesthetic value of Racim’s work.

The research is published in the American Historical Review, where there is a QR code to the Instagram account showing the images and article together.

Because much of Racim’s work was treated as having no intrinsic value, little effort was made to record and analyse its presence in the world. Professor Gallois hopes his research will counter this loss of cultural memory.

The rare pictures shown as part of the article are from Professor Gallois’ own archive of 10,000 photographs, postcards, advertisements, cigarette papers and other forms of ephemera, collected over the past decade.

Professor Gallois said: “Instagram is a great platform to show an unlimited number of high quality images, reach people across the world and potentially younger audiences too. There are already a huge number of people consuming research via Twitter, but Instagram is a place where I believe more productive and positive discussions can take place.

“The editors of the American Historical Review deserve credit for their willingness to innovate; they have been really good partners on this endeavour. I am enthused about the use of Instagram as a resource. The medium has given me the ability to present this research in the way I really wanted. I think Instagram will become a significant place for academic discussion to happen in the future.”

There are an increasing number of accounts on Instagram which catalogue, archive and critique images made by both indigenous and colonial groups during periods of imperial rule in Algeria, Morocco and Tunisia – work previously ignored, erased or misunderstood - which have tens of thousands of engaged followers.

Mohammed Racim, who lived from 1896 to 1975, was the son and nephew of two of its most significant makers of Islamic art. His brother Omar was jailed from 1913 until 1921 for the seditious distribution and production of Islamist literature.

During the early part of his career Racim lived in Paris, working as an artist for the publisher Éditions Piazza. At this time he began to create his own works on canvas, illuminated miniatures in a style dominant in the Persianate and Ottoman worlds, which were admired by painters and patrons in France and north Africa. The pictures depict Algiers as a pre-colonial urban idyll, as well as historic characters such as the Barberousse brothers who had successfully defended the city against European invaders.

On his return to Algiers in 1932 Racim would go on to exhibit a small number of other miniatures, whilst working primarily as a teacher of the traditional arts. These thirty or so miniatures have been in more or less constant circulation since, serving as illustrations for book covers, tourist brochures, postage stamps and other icons of everyday design.

Professor Gallois’ research shows how the un-modern form of Racim’s work also effectively neutered any potential for the paintings to be seen as politically defiant.

Nathan Draluck, Managing Editor of the American Historical Review, said: “This was an exciting challenge, because we had to think about the best way—in the confines of a print journal—to best direct readers to William’s fascinating and, frankly, cool Instagram page—which is itself the actual “article.”

Alex Lichtenstein, Editor of the American Historical Review, said: “When William came to me with the idea of presenting his research on Mohammed Racim in the form of an Instagram post, I confess I was sceptical. But I have been keen to experiment, so we went with it. Peer review and production posed some challenges, but in the end I think the result is rigorous, fascinating, and widely accessible. Moreover, the content matches the form--that is, William uses the life of Racim to ask probing questions about the nature of history and representation. He asks us to contemplate "learning to read a text whose significance was not seen in the moment in which it was made"--I like to think the same can be said of using a popular social media platform to present historical scholarship.”